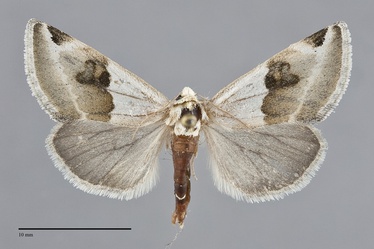 Plagiomimicus dimidiata is an attractive and distinctive medium-sized (FW length 13–16 mm) silver white, bronze gray-brown, and black moth that flies in the Wasatch Mountains of Idaho during the summer. The apex of the forewing is slightly pointed and the outer margin is smoothly convex. The wing base is pale silvery gray, nearly white. The distal half of the wing, bordered by the slightly irregular antemedial line, is smooth gray-tan with a bronze to olive cast that is darkest at the antemedial line and fades toward the outer margin. An ovoid or triangular black patch is present on the distal costa between the postmedial and subterminal lines. The postmedial line is diffuse and white, straight except for a 90 degree angle, apex lateral, near the costal margin. The fringe is pale gray. The orbicular and reniform spots are positioned close to each other, are gray to black in outline and are filled with the surrounding color or black. The orbicular spot is round to ovoid while the reniform spot is figure-eight shaped. There is no claviform spot. The hindwing is even smoky gray with a pale two-toned fringe. The head and thorax are white. The male antenna is filiform.

This species has a diagnostic wing shape and pattern and cannot be mistaken for any other moth in North America.

This species is widely distributed in the Southwest and southern Rocky Mountain region, but barely enters the Pacific Northwest.  It occurs in mixed middle elevation forest in Idaho.

Plagiomimicus dimidiata is restricted to the mountains of southeastern Idaho where it has been collected in the Wasatch range.

This species is found throughout the Four Corner States and in adjacent western Wyoming, southwestern Idaho, and western Texas.

No specific information is presently available regarding larval foodplants of this species. It likely feeds on a sunflower or related plant in the Asteraceae based on the preferences of many species in the genus.

Plagiomimicus dimidiata has been collected during July and August in the Northwest. It is nocturnal and comes to lights.