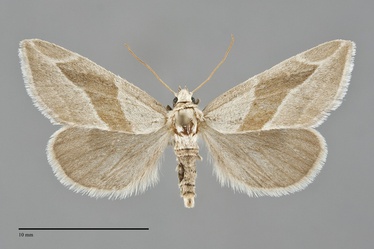 Plagiomimicus yakama is a small pale olive moth (FW length 12–13 mm) that flies in the Columbia Plateau ecoregion during early summer. The forewing has a distinctive geometric pattern of white lines on pale olive. The apex is pointed, slightly hooked in a few individuals. The median area and a small elliptical patch on the distal costa ("subapical spot") are darkest olive. The rest of the wing is pale whitish-green. The basal line is absent. The antemedial and postmedial lines are whitish gray, smooth. The antemedial line is mildly convex toward the outer margin. The postmedial line is bent acutely near the costa, apex directed distad. The subterminal line is pale, thinner than the other lines except for the apical segment which is connected to the postmedial line bend. The fringe is pale gray-green, base darker. Spots are reduced to a dark smudge at the end of the cell. The hindwing is medium gray with a pale fringe, median area slightly darker. The frons area of the head bears a raised upside-down-D-shaped tubercle with a pointed central cone. The head and thorax are pale olive-gray. The male antenna is filiform.

This species can be identified by its unique olive color and geometric pattern of white lines.

This species is rare and sporadic in very dry low-elevation sagebrush habitats in the Pacific Northwest, preferring rocky areas such as coulees and rimrock where its foodplant grows.

Plagiomimicus yakama flies on the Columbia Plateau in the Northwest and has been found in Oregon and Washington. In Washington it is most common near the Columbia River.

This species is found in two separate areas in the American West. The nominate subspecies is from the Pacific Northwest. Subspecies P. yakama mojave occurs in southern Utah, Nevada, northeastern Arizona, and southern California. Plagiomimicus yakama was until recently considered to be conspecific with Plagiomimiucs tepperi a species that occurs in from central Arizona to Colorado and Texas.

This species feeds on the flower heads and developing seeds of brickelbush (Brickellia spp.) in the Asteraceae.

Adults fly in late spring and early summer and have been collected from mid-May to early July in the Columbia Basin. They are nocturnal and come to lights.