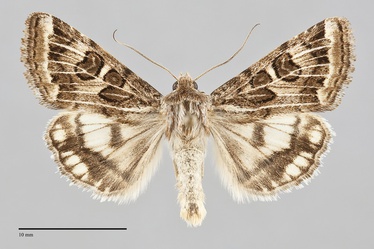 Protoschinia nuchalis is a medium-sized moth (FW length 14–17 mm) that flies in steppe habitat from spring to fall. It has light tan forewings with a net-like pattern of dark lines and pale veins, and large spots with black outlines and dark gray-brown filling. The forewing ground color is pale yellow-tan, with a darker gray-brown costa, wing base, subterminal area, and terminal area. Lighter gray-brown suffusion is present in the posterior terminal area, sparing a light streak in the fold. The veins are pale from the base to the subterminal line. The antemedial line is black laterally and brown medially, evident posterior to the cubital vein, prominently projected toward the outer margin on vein 1A+2A. The postmedial line is black medially and brown laterally, smoothly excurved to near the subterminal line around the end of the cell then oblique toward the wing base to the trailing margin. The subterminal line is the ground color, wide, slightly convex toward the outer margin with notches toward the base near the costal and trailing margins. The terminal line is black, weakly scalloped. The fringe is brown with faint checkering at the base and a gray median line. The spots are large, black in outline and filled with dark gray-brown. The orbicular spot is oval with the anterior and posterior margins "cropped" by the adjacent veins. The reniform spot is large, extending well beyond the cell. The lower end is traversed by the pale cubital vein. The claviform spot is very large and is traversed by a thin line in the fold. The ground color of the hindwing is the same as that of the forewing. Gray shading is present at the base and the inner margin. The large discal spot, veins, postmedial line, marginal band, and terminal line are dark brown-gray. The marginal band is incomplete with large patches of the ground color near the outer margin. The hindwing fringe is white with a base of the ground color and a dark median line. The head and thorax are brown-gray to gray. The male antenna is filiform.

This species can be identified by its pale yellow-tan and brown color and forewing pattern of pale veins and large dark spots. It is similar to Schinia crotchii and Schinia deserticola. These species have pale filling in the antemedial and postmedial lines, irregular pale subterminal lines, and small claviform spots, unlike those of P. nuchalis.

This species is widely distributed thoughout much of western North America in dry, open canyonland habitats east of the Cascades at low to middle elevations.  It is usually uncommon to rare with a sporadic distribution similar to that of the larval foodplant.

Protoschinia nuchalis is found in the dry interior of the Northwest as far north as southern British Columbia. In Washington it is most common in the northern and eastern parts of the Columbia Basin and is seldom collected along the east slope of the Cascades south of Okanogan County. It has also been collected in central and southern Idaho.

The range of this species includes the Great Plains from southern Canada to Texas. The range extends west to northern Arizona.

This species is a foodplant specialist feeding on green sagebrush (Artemisia dracunculus) in the Asteraceae.

Protoschinia nuchalis flies from late spring to early fall. Records from our area span May to September. It is nocturnal and comes to lights.