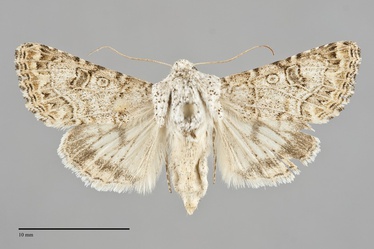 Schinia deserticola is a small (FW length 13 - 14 mm), pale "dirty white" moth that flies in southeastern Oregon during late spring and early summer. It has pale yellow-brown distal forewings with a pattern of thin black spots and double lines. The ground color is sandy very light gray-tan, slightly darker basal to the antemedial line and on the costa and darker and slightly yellow-brown distal to the postmedial line. The veins are pale except near the costa. The basal, antemedial, and postmedial lines are dark gray, double, with pale gray-tan filling. The basal line is short, evident on the costa. The antemedial line is slightly irregular and mildly excurved. The postmedial line is slightly irregular and very weakly scalloped, broadly excurved around the end of the cell, oblique at 45° toward the base on the mid-wing, bent perpendicular to the trailing margin on vein CuA2. The median line is gray. The subterminal line is light yellow-tan, very irregular and slightly diffuse. It is preceded by a dark shade and series of gray wedges between the veins, largest and darkest near the costa. The terminal line is a series of dark gray bars between the veins. The fringe is yellowish gray-tan with moderate checkering. The orbicular and reniform spots are thin, black, often incomplete posteriorly, with filling of the ground color and darker gray centrally. The orbicular spot is oval with a prominent central ocellus. The reniform spot is moderately large, kidney-shaped, with the posterior portion slightly exceeding the width of the cell. The claviform spot is absent. The hindwing is very pale gray-tan with darker gray veins, bar-like discal spot, and marginal band which contains spots of the ground color near the outer margin on the mid-wing. The hindwing fringe is white with a light yellow base. The head and thorax are speckled light gray. The male antenna is filiform.

This species can usually be recognized by its pale gray wing with warm yellow-brown color distally, pale veins, and crisp spots with a strong ocellus in the orbicular spot. Schinia crotchii, a rarely collected species found in southeastern Washington and southern Idaho in our region, has a similar size and pattern but is darker gray-tan and appears to be brown rather than dirty white. Some species of Anarta in the tribe Hadenini in the subfamily Noctuinae resemble S. deserticola. They have a claviform spot on the forewing and fine hairs on the surface of the eye, features that are lacking in S. deserticola.

This species is narrowly restricted to very dry sagebrush steppe at low elevations in the Great Basin region. It is very sporadic but may be locally common.

Schinia deserticola has only been collected in southeastern Oregon in our region.

The range of S. deserticola  extends south through Nevada and Utah to southern California and Arizona.

The foodplant of this species is Oenothera claviformis (Onagraceae) in California.

Adults fly in late spring and early summer. They have been collected in early June in southern Oregon and northern Nevada. This species is nocturnal and comes to lights.