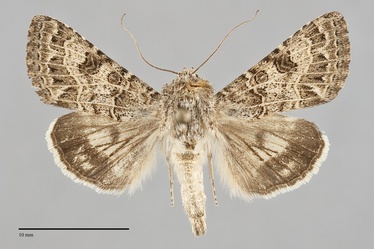 Schinia crotchii is a small (FW length 13–14 mm), powdery, light gray-tan moth that flies in southeastern Washington and southern Idaho during late spring and early summer. Its forewing has a net-like pattern of pale veins and light and dark transverse lines. The median area is light gray-tan with a sandy appearance, due to numerous dark scales. The ground color of the rest of the wing is uniformly darker gray-brown. Most of the veins except near the costa are pale. The basal, antemedial, and postmedial lines are dark gray, double, with lighter yellow-brown filling. The basal line is short, evident on the costa. The antemedial line is slightly irregular, mildly excurved toward the outer margin below the cell. The postmedial line is slightly irregular and very weakly scalloped, broadly excurved around the end of the cell, oblique at 45° toward the base on the mid-wing, bent perpendicular toward the trailing margin on vein CuA2, and bent toward the base on vein 1A+2A. The median line is powdery gray. The subterminal line is the same color as the filling of the other lines, with a very irregular inner margin and smoother lateral margin. It is preceded by a series of dark gray wedges between the veins. The terminal line is a series of dark gray triangles between the veins. The fringe is dark brown-gray with weak checkering. The orbicular and reniform spots are thin, black, with filling of concentric light tan and dark brown lines and tan centers. The orbicular spot is round, slightly flattened by the adjacent radial and cubital veins. The reniform spot is moderately large, kidney-shaped, with the posterior portion slightly exceeding the width of the cell. The claviform spot is absent. The hindwing is pale gray-tan with gray suffusion on the base and anterior and inner margins, darker gray veins, large discal spot, and marginal band which contains spots of the ground color near the outer margin on the mid-wing. The hindwing fringe is white with a two-toned yellow and gray base. The head and thorax are sandy gray-tan. The male antenna is filiform.

The moth figured above is a specimen of Schinia cupes, a species that does not occur in our area. This species and S. crotchii are superficially identical but differ structurally in that the abdomen of S. cupes has hair pencils that S. crotchii lack and by differences in the number of coils in the male vesica (4 in S. cupes and 3 in S. crotchii).

Schinia crotchii is similar to Schinia deserticola but is much darker on both wings. The ground color of S. deserticola is described as "dirty white" by Pogue and Harp (2003). Schinia crotchii bears some resemblance to Schinia nuchalis. This species is larger and has an even pale subterminal line, not irregular as in S. crotchii. Some species of Anarta in the tribe Hadenini of the subfamily Noctuinae bear a superficial resemblance to S. crotchii. They have a prominent claviform spots and have hairs on the surface of the eye, both features absent in S. crotchii.

No information is presently available regarding habitat preferences for this species in the Pacific Northwest.

Schinia crotchii has only been found in southeastern Washington and on the Snake River Plain of southern Idaho in the Northwest.

This species occurs in California and Arizona outside the Pacific Northwest.

This species is reported to feed on owl clover (Orthocarpus spp., Scrophulariaciae) in California.

The flight period of S. crotchii is late spring and early summer. It has been collected during June in our area. It is nocturnal and comes to lights.