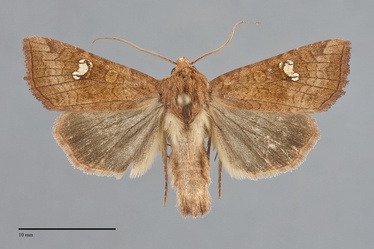 Amphipoea americana is a medium-sized orange-brown moth (FW length 13–16 mm) that flies in the western and northern parts of the Northwest during summer. It has an acutely pointed forewing apex, an orange or white-filled reniform spot, and a gray hindwing. The forewing apex is slightly hook-tipped. The color is bright orange-tan to reddish orange-brown, with a slightly darker grayish spot before the subterminal line on the costa and slightly lighter color in the mid-subterminal area and at the apex. The lines are red-brown, widely-separated double or triple filled with the ground color. The antemedial line is slightly zigzagged. The postmedial line is nearly even, slightly offset toward the base on the costa and weakly excurved around the reniform spot. The median line is the same color as the other lines, curved around the medial reniform and bent at the lower spot. The subterminal line is pale but often only visible at the apex, although its position is evident as the transition between the lighter subterminal area and the darker terminal area. The terminal line is dark and thin. The fringe is slightly darker and grayer than the rest of the wing. The outlines of the orbicular and reniform spots are similar to the lines. The orbicular spot is round, filled with the ground color or warm orange. The reniform spot is broad and kidney-shaped, with a slight lateral extension from the lower portion, filled with a thin lunule of grayish ground color medially and warm orange or cream elsewhere except that the veins are dark. The small claviform spot is rimmed with reddish-brown and filled with the ground color, or is sometimes absent. The hindwing is grayish-tan at the base and medium gray elsewhere, fith faint discal spot. The hindwing fringe is pale gray-tan, often pink-tinted. The head and thorax are similar to the forewing ground color. The male antenna is beaded.

This moth can be identified by its warm orange color, slightly pointed apex, orange or white-filled reniform spot, and gray hindwing. It is most likely to be confused with Amphipoea pacifica, which occurs in western Oregon. A. pacifica is more colorful, with a slight violet hue on the forewing and brighter orange in the forewing spots. It can be distinguished most readily by the color of the hindwing, yellow-tan with reddish hue near the outer margin rather than gray, as in A. americana. Its reniform spot is always orange, without the white form found in A. americana.

Amphipoea interoceanica is a closely similar moth that occurs in eastern and central North America. These species are easily distinguished by genitalia structure. Some West Coast Amphipoea specimens resemble this species superficially; however, all in which the male genitalia have been examined are A. americana.

This species is common and widely distributed in moist forest and grassland habitats in eastern North America. In the Pacific Northwest, it is found in mixed hardwood-conifer forests of the Rocky Mountain region, and in coastal grasslands and marshes near the Pacific Ocean.

Amphipoea americana is found in southern British Columbia, northern Washington, and in the Blue Mountains of northeastern Oregon east of the Cascades. Further west it occurs near the Pacific Ocean in Oregon and southwestern Washington, with records clustering near the mouth of the Columbia River. It appears to be replaced by the similar moth Amphipoea pacifica in inland localities west of the Cascades.

This moth is widely distributed in eastern North America where it is found from Nova Scotia to northern Georgia in the Appalachian Mountains. The range extends from central Alberta to the northern parts of New Mexico and Arizona in the Rocky Mountains. The range on the West Coast extends to south of Monterey Bay through northern and central California.

This species bores into the roots of grasses (Poaceae), sedges (Cyperaceae), and the rhizomes of irises (Iridaceae).

The flight period of A. americana is summer to early fall, typically July to early September. It is nocturnal and comes to lights.

In eastern North America, this species is sometimes a pest in agricultural crops of corn, or in domestic cultivations of irises (Iris spp.) in the Iridaceae.