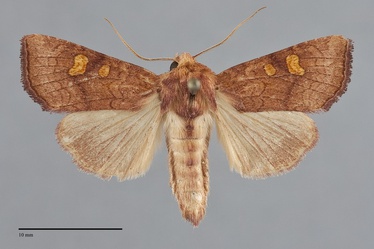 Amphipoea pacifica is a colorful, small to medium-sized orange-brown moth (FW length 14–16 mm) that flies in western Oregon during summer. Its forewing has an acutely pointed forewing apex and bright orange-filled spots, and its hindwing is light yellow-tan and rose-tinted. The forewing apex is slightly hook-tipped. The color is bright reddish orange-brown with a violet tint on the distal wing. The subterminal area and filling of the postmedial line are slightly lighter than the median or terminal areas. The lines are red-brown, widely-separated double filled with the ground color. The antemedial line is scalloped, oriented perpendicular to the posterior margin. A dark median line is bent at the lower reniform spot, more strongly angled anteriorly than across the lower wing. The postmedial line has a slightly scalloped medial component and smooth outer line, offset toward the base on the costa and weakly excurved around the reniform spot. The subterminal line is pale but often only visible at the apex where it preceded by a spot that is slightly darker than the rest of the wing. The terminal line is dark, thin. The fringe is slightly darker and grayer than the rest of the wing. The outlines of the orbicular and reniform spots are similar to the lines and both spots are filled with warm bright orange. The orbicular spot is round. The reniform spot is broadly kidney-shaped. The claviform spot is usually absent, small, red-brown filled with the ground color when present. The hindwing is yellow-tan with a slight gray tint in the marginal area in some specimens and a rose-pink flush toward the outer margin that is often accentuated in the fringe. The head and thorax are similar to the forewing ground color. The male antenna is beaded.

This species can usually be identified by its colorful warm red-orange forewing and bright orange-filled spots in combination with a nearly yellow and pink hindwing. It is most likely to be confused with Amphipoea americana, a species that is restricted to the immediate coastline in western Oregon. It is slightly duller colored and has gray hindwings. It has a form with cream-filled reniform spot that does not exist in A. pacifica.

Amphipoea pacifica occurs in western Oregon except on the immediate Pacific Coast. It is most common along the west slope of the Cascades, but also occurs through the Willamette Valley and in the Siskiyou Mountains.

This species probably occurs in northern California but has not been recorded from there on the Moth Photographers Group web site.

No information is presently available regarding the larval biology of this species, but it probably bores into the roots of forest grasses (Poaceae) and sedges (Cyperaceae) like the closely related A. americana.

The flight season of A. pacifica is summer and fall. Most records of this species are from August and September. It is nocturnal and comes to lights.