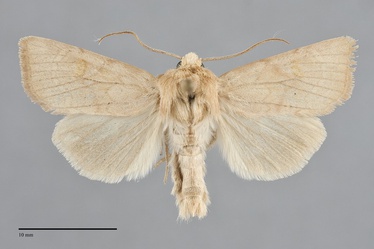 Amphipoea keiferi is a medium-sized, dull, straw-colored to orange-tan moth (FW length 14–17 mm) that flies in dry deserts and pine forests during the fall. The forewing is slightly pointed and has a faint pattern of slightly darker lines and spots. The color is even, sometimes suffused with gray, usually darkest on the distal wing. The transverse lines are thin, a slightly darker shade of the ground color. The postmedial line is zigzagged between the veins, pointing inward on each vein, and is oriented at a slant toward the anal angle. The median line is more diffuse than the other lines and often slightly darker, angled at both margins and bent 90° on the cubital vein. The postmedial line is scalloped, sometimes double with a thin outer component, and smoothly arched toward the outer margin. The subterminal line is usually absent, visible as a pale are in specimens with gray shading near the margin. The fringe is similar in color to the terminal area, sometimes grayer or redder. The spots are very faint. The orbicular spot is a round pale smudge when visible. The reniform spot is barely visible in most pale specimens and is an indisinct orange area is some individuals. No claviform spot is evident. The hindwing is pale straw-colored in pale specimens, more orange in redder ones, and suffused with gray except on the fringe in darker ones. The hindwing fringe is cream-colored. The head and thorax are similar to the forewing color but often slightly grayer. The male antenna is bead-like.

This species is usually easily identified by its pale straw to light orange-tan color, with or without gray suffusion on both wings. It resembles pale specimens of Apamea niveivenosa obscuroides and Nephelodes demaculata. The former species has a rounder distal forewing that usually has a gray terminal area, a sinuous subterminal line, and a streaked pattern due to light veins on the distally unlike A. keiferi. The latter species has a gray marginal area on the dorsal hindwing. Individuals of A. kieferi with gray hindwings are uniformly gray.

This species was referred to as Amphipoea senilis for many years. Don Lafontaine discovered recently that the correct name for the Pacific Northwest populations is A. keiferi and that A. senilis refers to a different species from the American Southwest.

This species is found in wet meadows or within the riparian zones along creeks at low to high elevations east of the Cascades where the larval foodplant occurs.  This plant is wild iris (Iris missouriensis).  The moth is often common in these habitats, which are adjacent to sagebrush steppe at low elevations and in ponderosa pine or mixed hardwood-conifer forests at higher elevations.

Amphipoea keiferi is found in the dry interior of the Pacific Northwest as far north as the northern Columbia Basin in Washington. It occurs as far east as the Snake River Plain in southern Idaho.

The range of this species includes northern and eastern California, although it is likely that it is more widespread in the northern Great Basin. The range is poorly known since the relationship of this species and A. senilis, found in the Southwest, was only recently elucidated.

This species is a foodplant specialist that bores into the rhizomes of wild iris (Iris missouriensis) in the Iridaceae.

The flight period of A. keiferi is the fall, beginning in late August and lasting to October. This moth is nocturnal and comes to lights.