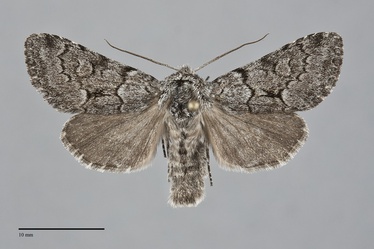 Lasionycta fergusoni is a medium-sized (FW length 14 - 18 mm), gray to blue-gray noctuid moth that flies in high elevation conifer forests as far south as northern Idaho and Washington. Its forewing has black antemedial and postmedial lines and large spots. The forewing is nearly even, hoary gray due to a mixture of black and gray scales, slightly darker in the median area. The distal wing is evenly colored beyond the postmedial line, occasionally with darker terminal area. The antmedial and postmedial lines are thick and dark gray to black, bordered with slightly lighter gray away from the median area. The antemedial line is smooth, and the postmedial line is weakly scalloped and S-shaped, laterally convex around the reniform spot and concave toward the wing base below this spot. The median line is only evident at the costa and in the cell. The subterminal line is usually absent. The orbicular and reniform spots are black and filled with uniform gray, slightly lighter than the ground color. The fringe is checkered with light and dark gray. The orbicular spot is oval, usually incomplete toward the wing base. The reniform spot is fairly large and kidney to heart-shaped. The claviform spot is long, spanning the median area to the postmedial line. The hindwing is dark gray with barely evident discal spot and postmedial line and a two-toned gray fringe. The head and thorax are hoary dark gray with a black line across the distal collar and a dark spot posterior to the collar. The male antenna is bipectinate with T-shaped individual segments.

This species is widely distributed at high elevations in subalpine spruce-fir forests of the northern Cascades and Rocky Mountains.

Lasionycta fergusoni is found at middle to high elevations in southern and eastern British Columbia, northern Idaho, and northern Washington.

Lasionycta fergusoni is found in the Rocky Mountains of western Alberta and in southern Yukon Territory outside of the Pacific Northwest.

The adults are on the wing during the summer, with Pacific Northwest records from late June to early August. It is nocturnal and comes to lights.