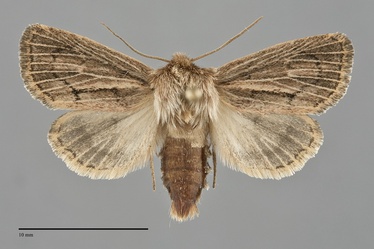 Hypocoena inquinata is a very small to small, tan moth (FW length 9–12 mm) that flies in wetlands during July. It has a streaky, rounded forewing with transverse markings limited to the postmedial and terminal lines and usually with black spots near the posterior margin. The forewing is short and rounded. It is gray-tan, slightly grayer and darker along the costa and outer margin. All of the veins are light tan producing a streaked pattern. Dark gray shading is present near the basal portion of the radial vein, and a diffuse black line is sometimes present in the fold across the median area. The antemedial line is absent or represented by a single black spot in the fold. The postmedial line is usually present but is incomplete, powdery black from the anterior cell to 1A+2A above the posterior margin, darkest in the fold where it is often condensed into a black spot similar to the one on the antemedial line. The terminal line is variable, faint gray to black interrupted by the veins. The fringe is the color of the terminal area. None of the usual spots are evident. The hindwing is light gray-tan to gray, usually slightly darker gray toward the margin, sometimes traversed by tan veins, with a thin dark terminal line. The hindwing fringe is light tan to gray. The head and thorax are tan to gray-tan. The male antenna is weakly beaded.

This small moth can usually be identified by its stubby wing shape, streaky gray-tan color, and reduced pattern of black spots and incomplete lines. Hypocoena rufostrigata, a similar sized species that flies in more xeric steppe habitats in our region, has a black basal dash and gray shade along the cubital vein that H. inquinata lacks. Hypocoena basistriga is a northerly species with dark gray hindwing and redder forewing than H. inquinata. Photedes defecta is another streaked wetland moth. It has a long forewing with a gray shade that extends from the base to outer margin along the cubital vein that is absent in H. inquinata.

This moth is mostly restricted to boggy meadows or the riparian zone along creeks and rivers.  In Oregon it is found in ponderosa pine forests at middle elevations along the east slope of the Cascades where it may be locally common. In northern Washington it has been found in wet meadows in middle elevations conifer forests. It also occurs in acid bogs in the Rocky Mountains of Alberta.

Hypocoena inquinata has been found in a few isolated localities in our region. It occurs in northeastern Washington, along the east slope of the Cascades in northern Oregon, in the Cariboo and Peace River regions of British Columbia, and in central and southeastern Idaho. It is likely to be more widespread than these records suggest because mid-elevation wet meadows where they might occur have been poorly sampled.

This species is widespread across boreal North America. It is widespread in the Canadian Prairie Provinces, occurring as far north as Churchill, Manitoba. The range extends east to the island of Newfoundland and as far south as Connecticut and West Virginia. It is cited as occurring in Colorado in Forbes (1954). A single record from northern California near the Oregon border is shown on the Moth Photographers Group website.

This species is a foodplant specialist feeding on sedges (Carex spp.) in the Cyperaceae.

Hypocoena inquinata flies during the summer, usually in July. It does not wander far from its wetland habitat. It is nocturnal and comes to lights.