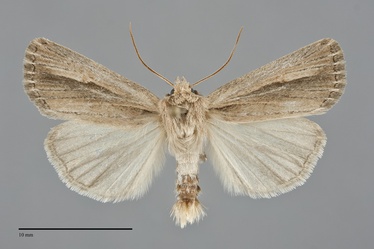 Hypocoena rufostrigata is a small tan moth (FW length 13–15 mm) that flies in dry habitats during the summer. Its forewing has a checkered fringe and light and dark streaks, including a gray streak near the cubital vein that widens toward the outer margin. The ground color is tan. A black basal dash is present, often diffuse due to dark gray shading on the adjacent posterior base. A streak of dark brown-gray extends on both sides of the cubital vein from the base of the cell to the outer margin, widening laterally. Similarly colored streaks extend along other veins near the outer margin. The costa is powdery gray and the posterior margin is lightest tan. The veins are covered with light and dark scales, appearing light gray to nearly black on the distal wing in some specimens. Most specimens lack transverse lines, although a few specimens have the postmedial line evident as small dark dots on the veins. A thin dark terminal line is also present. The gray-brown fringe is traversed by light tan lines at the ends of the veins, appearing checkered. No spots are evident. The hindwing, including the fringe, is pale gray-tan with slightly darker veins, slightly darker toward the margin in a few specimens. The head and thorax are uniform gray-tan to tan. The male antenna is weakly beaded.

This species can be recognized by its small size, the black basal dash, and the dark gray streak that extends along the cubital vein and broadens toward the outer margin. It could potentially be confused with Chortodes defecta, which has a similar streaky forewing with a dark mark on the mid-wing from base to margin. Its wing is long and rounded, and it lacks the basal dash and checkered fringe of H. rufostrigata. Other Chortodes species lack the dark shade on the wing that is present in C. rufostrigata.

This species is found in wetlands and moist prairies in much of North America.  In the Pacific Northwest, it is common in wet meadows at middle elevations of the Rocky Mountain region.  However, it has also been able to invade irrigated agricultural lands at low elevations east of the Cascades.  It is sometimes common in irrigated grass seed fields of Kentucky blue grass (Poa pratensis) in central Oregon.

Hypocoena rufostrigata is found in the dry interior regions of the Pacific Northwest, including in the Columbia Basin, southeastern Oregon, and the Snake River Plain of southern Idaho. It is also found in south-central British Columbia.

This species is widespread in North America, although the distribution in the East is relatively restricted. It is found from Alaska to southern Labrador across the north. The range extends south to New Brunswick and Quebec in the East. It is more widespread in the West, especially in the northern and western Great Plains. West of the Rocky Mountains it occurs in northern California outside of the Pacific Northwest.

This species feeds on grasses (Poaceae) and sedges (Cyperaceae) in wet grassland habitats.

This species flies during the summer, typically during June and July. It is nocturnal and comes to lights.