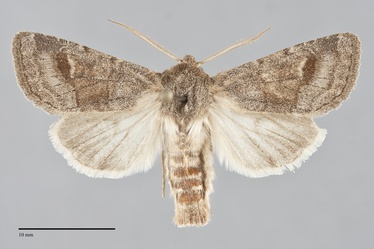 Nephelodes minians is a variable medium to large noctuid moth (FW length 15 - 20 mm in the Pacific Northwest) with smooth gray-brown, tan, or reddish brown forewings with darker median area outlining pale-filled spots. The forewing has a rounded anal angle. As indicated above, the forewing ground color is highly variable, although less within populations than over larger distances. There is a tendency toward richer red-brown forms in wetter habitats such as west of the Cascades and in north of the Columbia Basin and grayer forms in steppe locales. The median area is uniformly darker than the rest of the wing, and the subterminal area is usually slightly darker than the terminal area and wing base. The antemedial and postmedial lines are slightly darker than the ground color and smooth, usually with slightly lighter medial to the antemedial line and lateral to the postmedial line. The median line is oriented perpendicular to the wing and is darker than the rest of the median area. The pale subterminal line is slightly scalloped and undulating. It is preceded by a dark shade, heaviest at the costa. The terminal line is variable, absent to thin and dark. The fringe is similar to the terminal area in color. The orbicular and reniform spots are similar, slightly darker than the adjacent wing but most evident due to lighter filling that is similar to the terminal area or slightly lighter in color. The orbicular spot is round or ovoid. The reniform spot is oval, or weakly kidney- or figure-eight shaped. The claviform spot is usually absent, although it is occasionally evident as a small line of pale filling against the darker median area. The hindwing is very variable, pale whitish gray with darker marginal shading to dark gray. The fringe is pale whitish gray to pink, similar to the rest of the wing in light-colored specimens and contrasting pale in those with dark gray ground. The head and thorax match the forewing ground. The eye is densely hairy. The male antenna is moderately bipectinate.

This species is most similar to Nephelodes demaculata, differing mostly in color. This species is pale yellow-brown with a light yellow-brown hindwing. It is quite possible that these names refer to dissimilar forms of the same variable species. Resapamea innotata resembles some forms of N. minians. It lacks hairs on the surface of the eye. Its median area is less contrasting than that of N. minians and its postmedial line is scalloped rather than smooth.

Nephelodes minians is widespread in the Pacific Northwest, occuring at least as far north as central British Columbia. It occurs on both sides of the Cascades in southwestern British Columbia and Washington, but has only been found east of the Cascade crest in Oregon. This species occurs in forests and steppe habitat but is most commonly collected in forests.

The range of this species extends across North America to the East Coast. The northern limits are central Alberta and central Manitoba at mid-Continent and the island of Newfoundland in the East. The range stretches south to Georgia, New Mexico, and Nevada.

Nephelodes minians flies in the late summer and fall. Records from the Northwest extend from late July through September and are most numerous in late August and early September. It is a nocturnal species that comes to lights.

This species is sometimes a pest in eastern North America on grass crops such as corn or in livestock pastures.