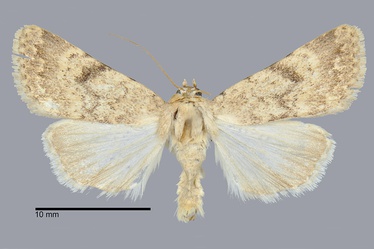 Protoperigea calientensis is a medium-sized (FW length 15 mm), light gray-brown moth that flies in southeastern Oregon in late fall. It has a dark reniform spot that appears to be joined to the costa by the dark median line, and a dark subterminal space accentuating a very irregular subterminal line. The forewing is uniform in color from the base to the postmedial line. The subterminal area is dark gray-brown, gradually darkening from medial to lateral, and the terminal area is powdery mixture of light and dark gray-brown. The basal, antemedial, and postmedial lines are gray, weak except at the costa where they condense into dark spots darkest at the postmedial line. The postmedial line is double with weakly dentate medial component filled with the ground color. It is gently excurved toward the outer margin near the reniform spot, then nearly straight and perpendicular to the wing to the trailing margin. The median line is gray, evident across the wing, coursing through the reniform spot, darkest from the reniform spot to the costa. The subterminal line is pale but evident mostly as the edge of the dark subterminal area, jaggedly irregular in shape. The terminal line is a series of spots between the veins. The fringe is concolorous with the wing base. The reniform spot is partially outlined in gray with a few pale spots along the medial wall and is filled with dark gray similar to the adjacent median line. Both orbicular and claviform spots are lacking. The hindwing is pale brown-gray, darker gray toward the margin, with a thin dark terminal line and pale whitish fringe. The head and thorax are uniform light gray-brown. The male antenna is filiform.

This rarely collected species can be identified by its fall flight period, sage steppe habitat, nondescript brown forewing with dark angled median line from the costa to the reniform spot, and dirty off-white hindwing. It is relatively small and light-bodied for the genus and resembles several members of the genus Euxoa more than other Protoperigea species, especially Euxoa pallipennis which flies in early summer. Structurally the genera Protoperigea and Euxoa are distinctive: most Euxoa have a raised frontal tubercle on the head (lacking in Protoperigea); all have a fourth row of setae on the mid- and hind-tarsi (three rows in Protoperigea); the valves of the male genitalia have a long saccular extension (absent in Protoperigea); and the cucullus of the male valve is truncate with a corona of stout curved setae (rounded and lacking a corona in Protoperigea). The latter character can be observed by brushing the scales from the tip of the abdomen. Protoperigea calientensis is most similar to Protoperigea posticata in its own genus. It also has a dark reniform spot, but its anterior median line is less conspicuous than in P. calientensis, its subterminal line is less jagged, and the hindwing is darker. Structurally, the tip of the valves are smaller which can be compared after brushing the scales from the valves.

This species occurs in dry chaparral and oak forests in southern California. The habitat at the only site where this species has been collected in the Pacific Northwest is sage steppe with scattered junipers (J. D. Lafontaine personal communication 2011)

Protoperigea calientensis has only been collected once in our region. It was found north of Frenchglen in Harney County, Oregon.

At the time of its description in 2006 this species was thought to be endemic to southwestern California. It has also been found in Wyoming and Oregon (J. D. Lafontaine, personal communication 2011).

The adults fly in late summer and fall. The only verified Pacific Northwest specimen was collected in mid-September. It flies from late August to November in California. The flight is probably shorter in our area, most likely from late August to early October.