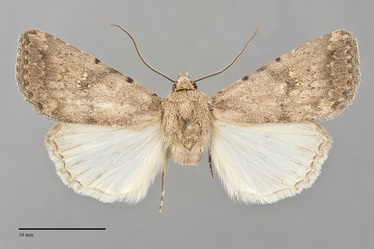 Protoperigea posticata is the most common of three similar Protoperigea species in our area, all of which fly during the fall. It is usually a medium-sized moth (FW length 14 - 19 mm) with powdery gray-tan forewings that are slightly darker gray near the outer margin and an off-white hindwing. The lateral subterminal area is the darkest part of the wing. The basal and antemedial lines are gray, incomplete and inconspicuous except at the costa where they form dark spots. The postmedial line is faint gray, scalloped on the veins, drawn sharply toward the base at the costal margin, then nearly straight lateral to the reniform spot from which it is separated by the width of the spot, and then difficult to trace to the trailing margin. The pale tan subterminal line is mildly irregular, sharply defined by the preceding gray shade. A diffuse gray median line extends across the wing, darkest near the costa. The orbicular spot is a small dark circle or is absent. The reniform spot is dark gray, sometimes with inner pale spots, with light to dark gray filling, usually appearing as a dark smudge. The claviform spot is absent. The hindwing is nearly white, slightly darker gray at the anterior and outer margins, with a thin terminal line but no other markings. The fringe is white to gray, darkest anteriorly. The head and thorax are unifrom grayish tan. The male antenna is bead-like.

This species can usually be recognized by its late summer and fall flight period, the non-descript gray-tan forewing, and off-white hindwing. It is similar to Protoperigea umbricata and Protoperigea calientensis. The forewing lacks dark veins in the subterminal area, a feature of P. umbricata. The hindwing is off-white in P. posticata and pure white in P. umbricata. Protoperigea calientensis, known only from south-eastern Oregon in our region, is a lighter-bodied species. Its anterior median line is dark and appears to connect the dark-filled reniform spot to the costal margin, a feature lacking in P. posticata. Also, its subterminal line is more jagged and its hindwing darker than in P. posticata.

This species is widely distributed east of the Cascades at low to middle elevations in dry pine and juniper woodlands and on sagebrush steppe. It is usually uncommon and sporadic.

Protoperigea posticata is found in the dry interior of the Northwest as far north as the Fraser Valley near Lillooet in southwestern British Columbia. It is widespread in the Columbia Basin and the deserts of southeastern Oregon and southern Idaho.

Protoperigea posticata is widespread in western North America where it occurs on the Great Plains and in the Intermountain Region. It is found from Alberta to Texas and New Mexico east of the Rocky Mountains and from British Columbia to Arizona and California further west.

No information is presently available regarding larval foodplants of this species, although herbaceous plants are suspected.

This species flies during August and September like our other Protoperigea species. It is nocturnal and comes to lights.