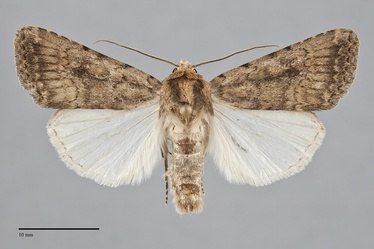 Protoperigea umbricata is a moderately large brown moth (FW length 18 - 20 mm) that flies in dry forests and steppe habitats during the early fall. It has darker gray on the distal forewing and pure white on the hindwings. The ground color of the wings is slightly mottled and powdery due to a suffusion of dark scales. The darkest gray area near the margin is medial to the subterminal line where it is darkest on the veins and in the terminal area. The gray transverse lines are usually faint and incomplete except as dark spots on the costa. The weakly scalloped postmedial line is usually visible. It is drawn toward the base at the costa, is most heavily toothed and straight near the lateral reniform spot, is smoothly concave toward the base below the spot, and toothed at the trailing margin. The subterminal line is a nearly straight series of pale brown spots between the veins. An indistinct median line is evident in darkly marked specimens. The orbicular spot is a small dark dot or is absent. The reniform spot is a gray smudge, sometimes with a portion of the lateral wall showing as a light line. The claviform spot is absent. The hindwing is pure white, rarely with portions of a dark terminal line. The head and thorax are tan, often with gray medial margins on the tegulae. The male antenna is bead-like.

This species can be recognized by the combination of fall flight with a nondescript brown forewing that is significantly darker near the outer margin and a white hindwing. It is similar in size and general appearance to Protoperigea posticata, which is slightly more common and widespread in our area. The distal forewing of P. umbricata is darker gray and more powdery than that of this species. In addition, P. posticata has a yellowish off-white hindwing, not pure white as in P. umbricata. Protoperigea umbricata is also similar to Protoperigea parvulata which is very rare and has only been collected in southeastern Oregon. It has a more deeply indented reniform spot, more irregular subterminal line, and an off-white hindwing that often has dark scales along the outer margin.

Protoperigea umbricata is found in dry forests both west of the Cascades in Oregon and along the east slope of the Cascades as far north as central Washington and in the Blue Mountains of Oregon.

The range of this species extends at least as far south as central California. Its distribution is poorly known, in part due to the fact that this species was only described in 2006.

No information is presently available regarding larval foodplants of this species, but herbaceous vegetation is suspected.

This species flies during the fall and has been collected from late July until early October in the Pacific Northwest. It is nocturnal and comes to lights.