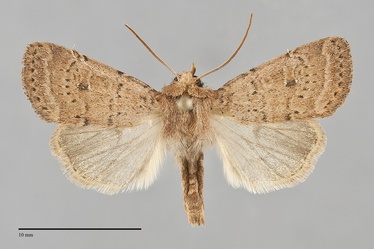 Homorthodes communis is a common, small, orange to gray-tinted tan moth (FW length 10 - 13 mm) that is widely distributed in all but the most xeric habitats in our region and flies during the late summer. The forewing is short and appears to be bluntly rounded. The color is even slightly orange-tan, gray-tan east of the Cascades, with a slight gray cast in the distal subterminal area and the entire terminal area. The basal, antemedial, and postmedial lines are gray to dark gray, double with ground-color filling. The basal and antemedial lines are slightly irregular, oriented nearly perpendicular to the wing. The postmedial line is smoothly excurved with a long arc across the wing, toothed with the tips of the teeth accentuated to form a row of small dark gray spots. The median line is absent. The subterminal line is a light shade of the ground, smooth and nearly nearly parallel to the margin with slight bends near both margins. It is preceded by an even gray shade, sometimes separated into ill-defined spots between the veins. The terminal line is a series of gray spots. The fringe is concolorous with the rest of the wing. The orbicular spot is very faint gray, a perfect circle with similarly faint ocellus. The reniform spot is bar-like or weakly hourglass-shaped, also faint gray sometimes with a few white scales along the outline of the lower half, filled with the ground color and a dark gray spot in the lower third. The claviform spot is absent. The hindwing is gray-brown with a slight brassy sheen, gradually darker gray toward the margin, with gray discal spot and veins. The hindwing fringe is shiny gray-tan. The head and thorax match the forewing color without dark markings. The eye is covered with fine hairs. The male antenna is bead-like.

This common species can usually be identified by its small size, light orange-brown color, and pattern of thin, dark lines and spots. It is most likely to be confused with uniformly-colored specimens of Homorthodes fractura in our region, and these species can be difficult to distinguish without examining the genitalia. Homorthodes communis is slightly smaller, has more orange forewing color with a darker terminal area, has lighter gray antemedial and postmedial lines, lacks a median line, and lacks red color in the reniform spot. In contrast, H. fractura tends to be gray-tan with a very slight pink tint, has a slightly lighter terminal area, has very dark gray forewing lines with dark dots on the tips of the very sharp teeth of both the antemedial and postmedial lines, usually has a visible median line, and has subtle red-brown in the reniform spot. Males can be distinguished by brushing the scales from the valves. The distal valve of Homorthodes communis is bent ventrad and has a narrow "neck" at the base of the cucullus. That of H. fractura is also bent. The valve is expanded and irregular at the bend, like a "knobby knee," and there is a broad connection between the cucullus and the adjacent valve.

Homorthodes communis demonstrates slight geographic variation in our region. Specimens from west of the Cascade Mountains are more vivid golden-brown and those from east of the mountains are grayer.

This species is widely distributed in moist forest habitats throughout much of western North America.  In the Pacific Northwest, it is common to abundant in coastal rainforests, oak woodlands, and mixed hardwood forests west of the Cascades at low elevations, and in mixed hardwood-conifer forests at higher elevations in the Cascades.  East of the Cascades, it is more restricted to moist riparian zones along creeks and rivers.

Homorthodes communis is widely distributed in low-elevation forested habitats in our region, including west of the Cascade and Coast Mountains. It is absent from the driest steppe habitats but occurs in riparian settings in the foothills of adjacent mountain ranges.

This species is found throughout the American West as far south as the southern parts of California, Arizona, and New Mexico.

This species feeds on hardwoods, particularly alders (Alnus spp.) in the Betulaceae.

The adults have a fairly long flight period during the summer but are most common in August and early September. They are nocturnal and come to lights.