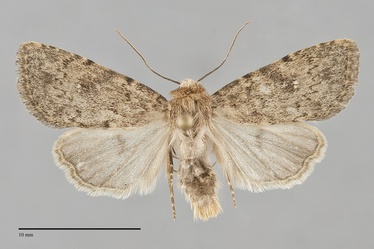 Homorthodes discreta is a small (FW length 13 - 14 mm), dingy, brown-gray moth that flies in dry desert environments in late summer and fall. Its forewing has gray mottling, lines, and a few white spots around the reniform spot. The forewing color is pale to medium-dark gray-tan with darker gray mottling along the costa and in the distal subterminal area abutting the subterminal line. Some specimens have a diffuse "dirty" gray suffusion. The pattern is often smeared because this species seems to become rubbed easily. The basal, antemedial, and postmedial lines are light to dark gray, evident as spot on the costa in specimens with light ones. The antemedial line is moderately irregular, with teeth on the veins, and is slanted toward the anal angle from the costa. The median line is diffuse gray, dark on the costa and variable elsewhere from nearly absent to dark and wide across the wing. The postmedial line has a strong toothed inner component and a weak outer one, is strongly pulled toward the base on the costa, is weakly excurved to nearly straight lateral to the reniform spot, and is slightly angled toward the base below the spot. The subterminal line is a pale shade of the ground color, diffuse, faint, and irregular, evident mostly as a transition from gray shade preceding it to the paler terminal area. The terminal line consists of dark lines between the veins. The fringe is the same color as the terminal area. The orbicular spot is variable, absent or a faint gray circle with or without a faint to moderately dark gray ocellus that sometimes is the only visible part. The reniform spot is outlined in weak gray, usually with several small white spots around the lower perimeter, bar-like or weakly kidney-shaped, filled with gray. The claviform spot is absent. The hindwing is light brown-gray with a sheen and a faintly darker discal spot and veins. The hindwing fringe is slightly paler with a gray and yellow base. The head and thorax match the forewing color without dark markings. The eye is covered with fine hairs. The male antenna is filiform.

This species can usually be identified by its small size and mottled "dirty" pattern of gray on a gray-tan base, with gray-filled reniform spot that has a few white spots around the lower half. Similar size species usually have a more distinct pattern or lighter or darker hindwings. Some well-marked specimens resemble Protoperigea anotha, a species that usually flies at moderate or high elevations. The most reliable way to separate these species is to examine the eyes under high magnification since P. anotha lacks hairs on them. Superficially, H. discreta has a more mottled pattern, especially in the distal subterminal area. Protoperigea anotha is a less stout moth and lack a gray outline and white spots around the reniform spot.

This species is widely distributed in dry habitats throughout much of the Pacific Northwest, preferring rocky habitats.  At low elevations east of the Cascades, it is found in dry canyonlands.  At higher elevations in the mountains, it is mostly restricted to rocky ridgetops.  It is particularly abundant on open, rocky lava flows along the summit of the Cascades in Oregon.

Homorthodes discreta flies in steppe and dry forest environments east of the Coast and Cascade divides as far north as south-central British Columbia. A few specimens have been collected further west, predominantly in southwestern Oregon. It is most common around the periphery of the driest basins in our area.

The range of this species is centered near the Pacific Coast. It is widespread in California south of the Northwest and has also been found in Arizona.

The flight period of H. discreta begins in mid-July and lasts to mid-September in our area. It is nocturnal and comes to lights.