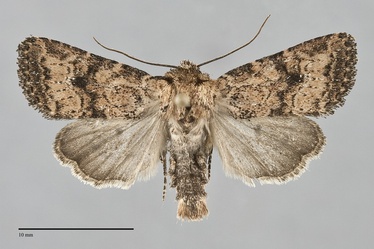 Homorthodes hanhami is a small moth (FW length 11 - 14 mm) that flies in the western part of the Pacific Northwest during the late spring and summer. It has a mottled, brown forewing with a dark median band and dark gray lower reniform spot usually associated with small white spots. The forewing is light brown, darker gray-brown along the costa and in the terminal area, and usually powdered with brown scales in the median area. The dark median line and an uneven shade preceding the subterminal line have prominent transverse marks. A small, black spot is present at the base of the cubital vein. The basal and antemedial lines are incomplete, gray, and filled with the light brown ground color. The antemedial line is toothed inward on the veins, with dark dots on the tips of the teeth. The postmedial line is gray, toothed, with two small spots on the veins in the subterminal area near the tips of the teeth, drawn toward the base on the costa, nearly straight near the reniform spot across the cell, and bent perpendicular to the trailing margin below the spot. The subterminal line is the ground color, nearly straight except for slight irregularity near both ends. It is preceded by a patchy shade that is slightly darker than the terminal area. The terminal line is a series of dark spots. The fringe is dark gray-brown, sometimes with tan checkering of the base. The orbicular spot is gray, faint, and circular, with or without a light gray ocellus. The reniform spot is outlined in a double dark gray-brown line, with several white spots around the periphery of the lower half that sometimes forms a pale patch next to the lateral lower end, filled with the ground color anteriorly and dark gray-brown inferiorly. No claviform spot is evident. The hindwing is slightly brownish gray with darker gray discal spot and veins. The hindwing fringe is light gray with a darker base. The head and thorax are brown, similar to the forewing color, with a weak median tuft behind the collar. The eye is covered with fine hairs. The male antenna is filiform.

This species can usually be recognized by its small size, brown color, dark median band and lines across the distal wing, and the dark lower reniform with adjacent white spots. It is unlikely to be confused with other Homorthodes species in the Northwest. It resembles Orthodes noverca, a species with which it is sympatric in southwestern Oregon. This species is brown and can have a dark median line. It usually has a black outline of the inferior orbicular spot that H. hanhami lacks, and lacks dark shade on both sides of the subterminal line, and the dark lower reniform spots with adjacent white spots.

The range of this species extends south through California. A few records are shown from further east in Arizona on the Moth Photographers Group web site.

No information is presently available regarding larval foodplants of this species, but it probably feeds on hardwoods based upon closely related species.

Most specimens of H. hanhami have been collected in June and early July, but it has been found as early as mid-May and as late as early August. It is a nocturnal species that is attracted to lights.