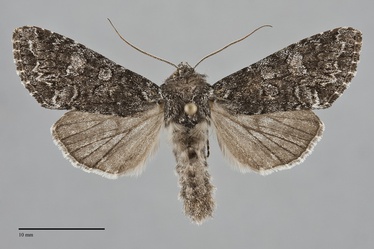 Papestra brenda is closely similar superficially to Papestra invalida, but is slightly smaller (FW length 16 - 19 mm). It is charcoal gray with lighter forewing markings, large pale-filled spots, a black bar across the median area, and a pale subterminal line that forms a "W" mark at the margin. The ground color is powdery dark gray with scattered light and dark scales, lightest and most powdery in the basal area, in the subterminal area, especially near the anal angle where there is usually a light patch. Some specimens have a black line across the lower median area from the tip of the claviform spot. Most of the veins are black distal to the postmedial line. The transverse lines are dark gray, double, with gray filling slightly lighter than the ground. The basal and antemedial lines are slightly irregular, with the latter slightly slanted from the costa toward the anal angle. The median line is black, diffuse and faint. The postmedial line is strongle toothed on the veins, sharply drawn toward the base on the costa, nearly straight lateral to the reniform spot, curved around the lower spot and touching it, then bent below the spot to meet the trailing margin at a right angle. The subterminal line is light to medium gray, offset toward the base below the costa, slightly irregular with a moderately strong W-mark on veins M3 and CuA1. It is preceded by dark gray at the costa and a series of variably prominent wedges between veins at the W and in the fold. The spots are black, moderately-large. The orbicular spot is round, filled with light to medium gray peripherally and a diffuse ocellus of the ground color. The reniform spot is similar, kidney-shaped. The claviform spot is small to moderate-sized, filled with the ground color to medium gray. The hindwing is slightly patchy gray, slightly darker gray toward the margin, with gray discal spot and veins. The hindwing fringe is light gray with a gray base. The head and thorax are hoary dark gray with lighter scales. A thin black line is present across the collar. The eye is covered with fine hairs. The male antenna is bead-like.

As noted above, P. brenda is closely similar to P. invalida and is best separated from it by its smaller size and high-elevation habitat. Papestra brenda often lacks the black bar across the median area which is almost always present in P. invalida.  Papestra invalida (FW length > 19 mm) is typically found in dry pine forests. These species differ structurally in the shape of the cornuti on the vesica of the male aedeagus (McCabe 1980). Those of P. brenda are thin while those of P. invalida are swolled basally and appear teardrop-shaped. Papestra cristifera flies with P. brenda in some localities. It differs in having paler whitish filling of the forewing spots, particularly in the reniform spot.

Papestra brenda is geographically variable. Specimens from the southern Rocky Mountains are paler gray with more contrasting black markings than those from the northern parts of the range, including the Pacific Northwest.

This species is widely distributed in montane forests throughout much of western North America.  In the Pacific Northwest, it occurs in mixed hardwood-conifer forests or spruce-fir forests of the Cascades and Rocky Mountain regions at middle to high elevations.  It is usually common in the proper habitat.

Papestra brenda is found at middle to high elevations throughout the Pacific Northwest. It has been most commonly collected in the Cascade Mountains of Oregon and Washington.

The range of P. brenda extends through the mountains of western North America. Outside of the Pacific Northwest, it is known from Alberta, Wyoming, Utah, and Colorado in the Rocky Mountains, in northern Nevada, and in eastern California.

Little information is presently available regarding larval foodplants of this species, but it is probably a generalist feeding on both hardwoods and herbaceous vegetation.

Adults are on the wing during the summer, usually slightly later in the year than P. invalida. They have been most commonly collected during June and July. They are nocturnal and come to lights.