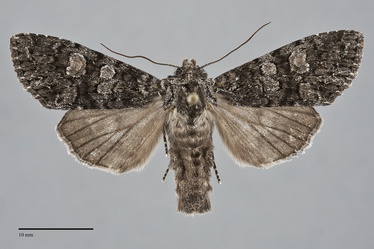 Papestra invalida is the largest of the North American Papestra species (FW length 20 - 23 mm). It is charcoal gray with lighter forewing markings, a black bar across the median area, and a pale subterminal line that forms a "W" mark at the margin. The ground color is powdery dark gray with scattered light and dark scales, lightest and most powdery in the basal area, in the subterminal area, especially near the anal angle where there is a gray patch, and on segments of the costa. A black line connects the claviform spot to the postmedial line across the lower median area. Most of the veins are black distal to the postmedial line. The transverse lines are dark gray, double, with gray filling slightly lighter than the ground. The basal and antemedial lines are slightly irregular, with the latter slightly slanted from the costa toward the anal angle. The median line is dark gray, diffuse and faint. The postmedial line is strongly toothed on the veins, broadly excurved around the reniform spot, touching the lower spot, and curving to meet the posterior margin at nearly a right angle. The subterminal line is light gray, irregular with a moderately strong W-mark on veins M3 and CuA1. It is preceded by black at the costa and a series of wedges between veins at the W and in the fold. The spots are black, large. The orbicular spot is round, filled with light gray peripherally and a central ocellus of the ground color. The reniform spot is similar and broadly kidney-shaped. The claviform spot is moderate-sized, filled with the ground color to light gray nearly as pale as the filling of the orbicular spot. The hindwing is dusky gray with a slight brassy sheen, slightly darker gray toward the margin, with gray discal spot and veins. The hindwing fringe is light gray with a gray base. The head and thorax are hoary dark gray with lighter scales. A thin black line across the collar separates the darker base from the lighter edge. The tegulae are bordered with dark medially. The eye is covered with fine hairs. The male antenna is bead-like.

This species can be recognized by its large size and dark gray color. However, it is very similar to Papestra brenda and Papestra cristifera. It is most easily separated from the latter species which has lighter white filling the forewing spots, especially the reniform spot, but is difficult to separate from P. brenda without dissection. They are best sorted by size and habitat. Papestra invalida is larger and flies in lower-elevation forests that are drier than those in which P. brenda occurs. Structurally, McCabe (1980) describes differences in the cornuti on the male vesica differ. Those of P. invalida are short and teardrop-shaped whereas those of P. brenda are thin and tapering.

In the Pacific Northwest, P. invalida is moderately common in mixed hardwood-conifer forests in the Siskiyou Mountains and in open ponderosa pine forests along the east slope of the Cascades and in the Rocky Mountain region at low to middle elevations. It appears to be replaced by P. brenda and P. cristifera at high elevations at most sites.

Papestra invalida is found along the east slope of the Cascades in Oregon, Washington, and southern British Columbia. It has been found less frequently in northern Washington and the Idaho Panhandle. The range also includes the Blue Mountains and Siskiyou Mountains in Oregon.

This species has the most restricted distribution of any Papestra in North America. It is only found in California outside of the Pacific Northwest.

This species is known to feed on various hardwoods including currants (Ribes spp.) in the Grossulariaceae and green manzanita (Arctostaphylos patula) in the Ericaceae.

Adults of P. invalida are single brooded and fly in late spring and summer. Records from our region extend from early May to early August. It is nocturnal and comes to lights.