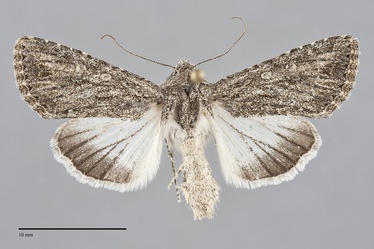 Scotogramma yakima is small to medium-sized noctuid moth (FW length 13 - 16 mm) that flies in sage steppe habitats during the fall. It has powdery gray forewings and white hindwings with a black marginal band on the dorsal side. The forewing is powdery medium-dark brownish gray, darker gray on the costa and on the terminal wing opposite the cell and in the fold. The veins are dark giving a slightly streaky appearance. The transverse lines are double, faintly visible on the costa. The subterminal line is similar to the ground color, faintly visible between a preceding gray shade or series of ill-defined spots and the gray terminal area. The fringe is tan-gray and gray with slight checkering. The orbicular and reniform spots have thin black outlines. The orbicular spot is oval, filled with a slightly lighter shade of the ground peripherally and the ground color centrally. The reniform spot is asymmetric kidney-shaped with a larger posterior half, filled with pale peripherally, the ground color centrally in the upper half and gray in the lower half. The claviform spot is black and filled with the ground color, elongate with a rounded apex. The hindwing is pure white with dark gray veins across the entire wing in females and on the distal third in males, with a strong, dark gray marginal band and white fringe. The head and thorax are sandy tan-gray with a faint line across the collar and faintly darker margins on the tegulae. The eye surface is covered with fine hairs. The male antenna is bead-like.

This species is closely similar to Scotogramma orida on the dorsal side, and these two species fly together commonly in southeastern Oregon. The ventral wings of S. yakima are nearly white, while those of S. orida have black submarginal bands on the ventral forewing and hindwing. Scotogramma ptilodonta, a rarely collected species from southeastern Oregon, resembles S. yakima. Males can be separated by the dorsal hindwings since those of S. ptilodonta are pure white. Females are more similar, but the forewing pattern of S. yakima is better defined than that of S. ptilodonta and the hindwing fringe of S. yakima is pure white whereas that of S. ptilodonta is white with a gray base.

The type locality of Mamestra yakima Smith is Yakima, Washington.

This species is widely distributed in the Columbia Basin and Great Basin regions east of the Cascades on very dry sagebrush steppe at low elevations.  It is sporadic, but may be locally common.

Scotogramma yakima is found in the dry western portion of Washington's Columbia Basin. It is also common in southeastern Oregon.

The range of this species extends south through northern Nevada and California to near the border with Mexico.

Scotogramma yakima does not appear until late fall, beginning in mid-September. It is nocturnal and comes to lights.