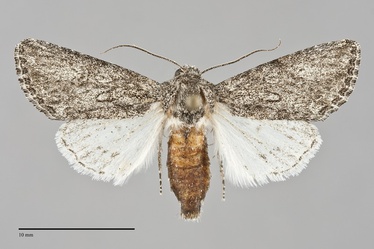 Scotogramma ptilodonta is a rarely collected, small to medium-sized noctuid moth (FW length 13 - 15 mm) that flies in extreme southern Oregon during the summer and early fall. It has white hindwings and nearly uniform, medium-gray forewings with a large reniform spot and prominent claviform spots. The forewing is dusty, medium-dark gray. The lines are nearly absent. The double black antemedial line is visible in one of six specimens examined. The pale subterminal line is faint and is preceded by a dark shade in the middle of the wing in several individuals. The orbicular spot is a oval, black but very faint. The reniform is also black and relatively large in size. It is also indistinct but is more evident because its lower portion is suffused with dark gray. The claviform spot is black and sharply defined. The hindwing is white in males with scattered dark scales along the veins, darkest at the position of the postmedial line, and at the thin terminal line; the hindwing is light gray in females with diffuse darker gray along the veins and as an ill-defined marginal band. The hindwing fringe is white in males and two-toned gray inner and white outer in females. The thorax and head are gray. The male antenna is bead-like. The surface of the eye is covered by fine hairs.

This species is similar to Anarta fulgora and appears to be a washed-out specimen of it, but flies later in the year and has lighter hindwings in both sexes (most evident in males). Two desert-flying Scotogramma species that fly late in the year, Scotogramma yakima and Scotogramma orida, are also similar to S. ptilodonta. As with A. fulgora, males can be differentiated by the dorsal hindwing which has a dark margin in both of these species. The female of S. orida can be told from S. ptilodonta because the ventral hindwing has a black marginal band that the latter lacks. Females of S. yakima are more difficult to tell apart from S. ptilodonta. The markings of S. ptilodonta are less crisp than those of S. yakima on both wings, including the dark band on the hindwing. Also the dorsal hindwing fringe of S. ptilodonta is two-toned with an inner gray component, while that of S. yakima is pure white.

This species occurs on very dry sagebrush steppe in the Great Basin region. It is associated with sand dunes in Oregon and Nevada. It is rarely collected in Oregon.

Scotogramma ptilodonta has only been found in extreme south-eastern Oregon at Crescent Dunes north of Denio, Nevada.

The range of this species includes the western Great Basin, central and southern California, Arizona, and southern New Mexico.

Adults are on the wing in late summer. It has been collected in July and August in Oregon and Nevada. This species is nocturnal and comes to lights.