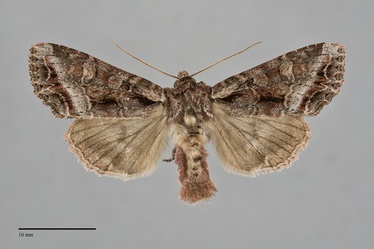 Lacanobia grandis is a medium-sized moth (FW length 17 - 19 mm) that flies in forests during early summer. It has red-brown forewings marked with black dashes at the base and across the posterior median area, a blue-gray band across the subterminal area and apex, and a prominent W-mark on the mid-subterminal line. The outer margin is slightly scalloped with a slight concave segment above the anal angle. The forewing is red-brown, grayer along the costa and basal to the antemedial line. Most of the subterminal area except the costa is blue-gray, with red-brown abutting the subterminal line. The terminal area is dark gray, nearly black near the W-mark and blue-gray at the apex. Thick black basal and median dashes are present. The basal and antemedial lines are gray, double filled with light gray-brown. The basal line is evident at the costa. The antemedial line is excurved, pulled toward the base on the veins. The median line is gray, diffuse, a faint oblique mark on the costa and sometimes visible across the posterior wing. The postmedial line is double, gray filled with the ground color on the anterior wing and with lighter gray on the posterior wing, toothed on the veins, pulled toward the base on the costa, nearly straight lateral to the reniform, and strongly angled inward below the cell. The subterminal line is pale yellow, irregular, offset toward the base on the costa and forming a strong W-mark on M3 and CuA1. Several black spots precede the line on the mid-wing. The terminal line is a series of black triangles. The fringe is dark gray to red-brown traversed by pale at the ends of the veins in some specimens. The orbicular and reniform spots are partially outlined in thin black, often open anteriorly. The orbicular spot is circular or ovoid, filled with light to medium-dark gray peripherally and darker gray to red-brown centrally. The reniform spot is large, kidney-shaped, filled peripherally with pale gray to dull ochre and centrally with brown and gray. The claviform spot is variable, absent, thin black, or pale. Its posterior wall is a component of the black median line. The hindwing is brown-gray with a brassy sheen, darker toward the margin, with darker gray discal spot, veins, and terminal line. The hindwing fringe is whitish gray with a brown-gray base. The head and thorax are red-brown with a black transverse line across the distal collar, and pale gray edges on the collar and tegulae. Paired tufts are present on the anterior thorax. The eye is covered with fine hairs. The male antenna is beaded.

This species can be identified by the combination of features in the first sentence introduction, above, particularly the basal and median dashes and the blue-gray subterminal area. Some other Lacanobia species are generally similar but lack the blue-gray band across the distal forewing. Several species of Trichordestra have similar blue-gray subterminal areas, but lack the basal dash of L. grandis and have lighter filling in the orbicular spots.

This species is common and widely distributed in moist hardwood forests throughout much of eastern North America, extending westward to the Rocky Mountains.  In the Pacific Northwest, it is very rare and sporadic in mixed hardwood-conifer forests of the northern Rocky Mountains, although it can be fairly common in the few places where it occurs.  A disjunct population west of the Cascades is narrowly limited to mixed hardwood or mixed hardwood-conifer forests at low to middle elevations.

Lacanobia grandis is found in southern British Columbia, northern Idaho, and western Oregon and Washington in the Pacific Northwest, but appears to be local because it is rarely collected.

The range of this species extends east to the Atlantic across southern Canada and the northern United States. The distribution extends from Nova Scotia to Virginia along the East Coast. The southern limit of the range is Illinois and North Dakota in the Heartland. Its range extends to Colorado in the Rocky Mountains. It does not occur in the Great Basin or California.

Adults of L. grandis fly in late spring and early summer and have been collected in May and June in our region. They are nocturnal and come to lights.