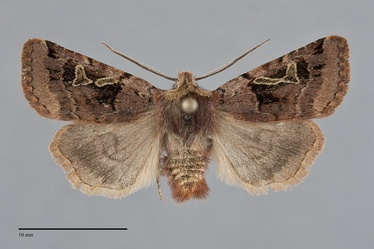 Cerastis enigmatica is our most common Cerastis species in the western part of our region. It flies in early spring and is a small to medium-sized moth (FW length 13 - 15 mm) with fused pale yellow orbicular and reniform spots set against a mottled wood brown, red brown, or gray brown ground color. The forewing median area is usually darker than the rest of the forewing, and the terminal area is lightest. Females tend to be grayer and darker than the males. The basal, antemedial, and postmedial lines are double filled with slightly lighter color than the ground. The basal line is evident only at the costa. The antemedial line is irregular, and the postmedial line is scalloped and fairly smooth. The subterminal line is preceded by black wedges at the costa and opposite the cell. The orbicular spot is narrow and horizontal with the lateral portion fused to the reniform spot. Both are usually pale yellow filled with the ground color. A few specimens have more extensive pale yellow filling of these spots. The small claviform spot is black. The hindwing is light gray with a warm brown tint and light gray discal spot, median line, and submarginal area. The top of the head and thoracic collar are light brown, almost cream, and contrast with the remainder of the thorax which matches the forewing ground color. The male antenna is bipectinate, about 3X as wide as the central shaft.

This species can only be confused with Cerastis gloriosa in our area, a slightly larger species that is distributed near the Pacific Coast. Cerastis enigmatica is slightly smaller, is more wood brown lacking the a pink tint present in C. gloriosa, and its fused forewing spots are yellow and usually filled with dark rather than almost entirely white as in C. gloriosa. In addition, the antenna of C. enigmatica is wider (2X as wide as the shaft in C. gloriosa).

The type locality of Cerastis enigmatica is Vancouver, British Columbia.

Larva is smooth, light brown with darker brown dorsal-lateral chevrons and a thin white lateral line.  It is illustrated by Lafontaine (1998).

This species is narrowly endemic to the West Coast, and is common to abundant in coastal rainforests, oak woodlands, mixed hardwood forests, and mixed hardwood-conifer forests at low to middle elevations west of the Cascades.  It is relatively uncommon or rare in spruce-fir forests along the summit of the Cascades, and in oak savanna of southwestern Oregon.

Cerastis enigmatica is common in the western part of the Pacific Northwest. In Oregon and Washington it is mostly found west of the Cascade crest, with a few records to the east (including in the Columbia River Gorge).

This species is restricted to the Pacific Coast region of North America from the Alaska Panhandle south to northern California. It is replaced by the similar species Cerastis cornuta in the San Francisco Bay region of California and Cerastis robertsoni on the central California Coast.

This species is a foodplant specialist feeding on salmonberry (Rubus spectabilis) in the Rosaceae within coastal rainforests, but it may also feed on other Rubus species in drier habitats such as oak woodlands.

Adults are single brooded and fly in early spring. It is one of the earliest moths in our area, with records from late February. The flight usually lasts until late April. It is attracted to lights. Males are more commonly collected than females.