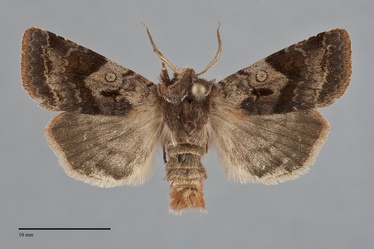 Cerastis salicarum is a distinctive spring-flying noctuid moth found in southern and central British Columbia in the Pacific Northwest. It is a medium-sized moth (FW length 14 - 16 mm) with banded, gray-brown forewings marked with a round orbicular spot with a central ocellus and a black claviform spot. The area between the median and postmedial lines is rich darker red-brown, and the costa preceding the subterminal line and terminal area are darker gray brown. The median line is smooth, with a prominent lateral angulation at the cubital vein which is accentuated by the difference in color medial and distal to the line. The most prominent marks are the black claviform spot and circular orbicular spot, usually containing a central ocellus. The reniform spot is present but inconspicuous because it is situated in the dark band in the distal median area, but is often evident due to its reddish brown filling. The nearly straight subterminal line is light yellow brown. The hindwing is gray with a slight reddish tint, with slightly darker gray median line and marginal area. The head and thorax are similar to the forewing ground color, with lighter gray at the edge of the collar and darker red-brown tegulae. The abdomen is gray with reddish scales toward the posterior end. The male antenna is moderately bipectinate while that of the female is simple.

This species can be told from other spring-flying noctuid moths by the combination of a circular orbicular spot and small black claviform spot on a banded-appearing brown forewing.

This species is widely distributed across Canada in moist hardwood-conifer forests, extending westward to the northern Rocky Mountain region.

Cerastis salicarum is known from central and southern British Columbia in our area, extending south to northern Idaho.

This species is found in boreal forest habitats across North America from Alaska to the Atlantic. It has been found from Labrador and central Quebec to Ohio and West Virginia in the East. The range extends through the Prairie Provinces west to southern Montana, British Columbia, and southern Alaska in the West.

Adults are single brooded and fly in the spring. They are nocturnal and come to lights.