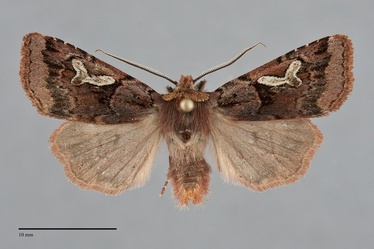 Cerastis gloriosa is a medium sized (FW length 16–17 mm), rarely collected, early spring-flying moth with prominent, white, fused orbicular and reniform spots set against a rich brown ground color with a slight pink cast. The basal, antemedial, and postmedial lines are black, filled with slightly lighter brown than the ground color. The former two lines are irregular in shape and the postmedial line is scalloped. The postmedial line is preceded by a series of black wedges anterior to the mid wing. The terminal area is slightly lighter than the ground color. The orbicular spot is oblong and fused to the reniform spot that is drawn toward it. Both spots are nearly white and usually filled with pale gray to light brown, appearing mostly white. The hindwing is pinkish gray with a lighter pink fringe. The head and collar are lighter brown than the rest of the thorax which matches the forewing color. The abdomen is gray, lighter pink tinged posteriorly. The male antenna is narrowly bipectinate, approximately 2x as wide as the central shaft.

This species can be identified by its white fused forewing spots set against a dark pink-brown ground color. Cerastis enigmatica is most similar and overlaps its entire range. The forewing spots of this species are more yellow-brown, even when filled with lighter scales, and its ground color is less pink-tinted. The male antenna of C. gloriosa is narrower than that of C. enigmatica (approximately 3X the width of the shaft in the latter species). Cerastis enigmatica tends to be slightly smaller than C. gloriosa. The size difference is most apparent when the moths are seen side-by-side.

This species is narrowly endemic to moist forest habitats along the West Coast.  In the Pacific Northwest, it is usually rare and sporadic.  It may be most common in coastal sphagnum bogs, but also occurs in coastal rainforests, oak woodlands, mixed hardwood forests, and mixed hardwood-conifer forests in the Coast Range and along the west slope of the Cascades at low to middle elevations.

This rarely collected species is found near the Pacific Coast from the vicinity of Grays Harbor, Washington to southern Oregon. It also occurs rarely in forest in the Cascade Range as far north as Skamania County, Washington.

The range of this species includes coastal California as far south as Monterey County.

No information is presently available regarding larval foodplants of this species, but it probably feeds on hardwood shrubs based on related species.

Adults are single brooded and fly in early spring. Pacific Northwest records are from late March through April. It is nocturnal and males come readily to lights. Females are rarely collected.