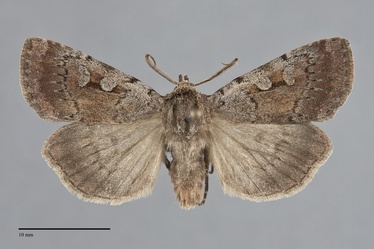 Coenophila opacifrons is a medium-sized moth (FW length 15 - 17 mm) with a wide, bipectinate male antenna and gray forewing suffused with variable amounts of light red-brown distal to the antemedial line and a red-brown and black line in the cell, outlining the gray-filled orbicular and reniform spots. It has only been found in east-central British Columbia in our region. The gray forewing ground color is a mixture of light and dark scales that gives a powdery appearance. The reddish suffusion is variable, sometimes strong across most of the forewing but sometimes confined to the cell above a black line that connects the two spots. A slightly darker gray shade is present medial to the subterminal line. The other transverse lines are black and single. The antemedial line is slightly irregular and obliquely oriented across the forewing. The postmedial line is sharply dentate with narrow teeth that have gray on the veins distal to them in specimens with red-brown suffusion distal to the line. The median line is absent or very faint. The orbicular and reniform spots are thin and black and are filled with the gray ground color. The orbicular spot is open toward the costa and is semicircular or ovoid in shape. The reniform spot is also faint or absent, evident only as the lighter gray filling. The claviform spot is absent. The hindwing is light luteous gray with slightly darker discal spot, postmedial line that is lightly scalloped or evident only on the veins, and marginal band. The hindwing fringe is slightly lighter, usually with a light gray inner component. The head and thorax are gray, with red-brown on the collar in specimens with extensive red-brown on the forewing. The male antenna is bipectinate.

This species can be identified by its powdery gray color, pale spots that are outlined by red-brown and black in the cell, and bipectinate antenna (in males). The most similar species, Setagrotis pallidicollis, has similar color and lines but differs in that it has an elongate oval or diamond-shaped orbicular spot that is completely outlined in black, has narrower forewings, and has a biserrate male antenna. Xestia praevia is also similar. It has a larger oval orbicular spot that contains red-brown color unlike the pale gray spot of C. opacifrons, has a black basal dash that C. opacifrons, and has a wider bipectinate male antenna.

Larva is smooth, pale brown to black with a yellow sub-dorsal line and a white lateral band.  It is illustrated by Lafontaine (1998).

This species is widely distributed across Canada in boreal peat bogs, extending westward to the northern Rocky Mountain region.

Coenophila opacifrons is only known from a single locality in east-central British Columbia in our region (Lafontaine 1998).

The British Columbia record is the western-most in North America. Its range extends through the boreal zone east to the Atlantic where it occurs from the island of Newfoundland to southern New Jersey. There is a seemingly isolated record from south-western Montana (Lafontaine 1998).

This species is known to feed on huckleberries (Vaccinium spp.) and leatherleaf (Cassandra calyculata) in the Ericaceae and myrica (Myrica spp.) in the Myricaceae.

Adults have a single brood in summer to early fall. Records from western Alberta are from July. This species is single brooded and comes to lights.