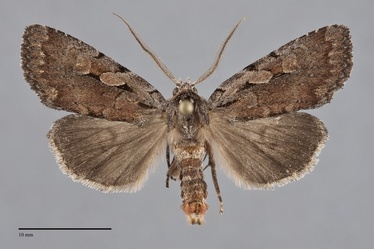 Xestia praevia is a reddish gray medium-sized Xestia (FW length 16 - 18 mm) that is found in central and eastern British Columbia in our region. It has a wide bipectinate male antenna and a forewing with an elongate, oval orbicular spot and reduced black markings along the costa, cell, and base. The forewing is smooth reddish gray, lighter gray along the costa and in the terminal area. A black basal dash is present, and there is a black line in the posterior cell from the antemedial line to the reniform spot. The transverse lines are single, gray except at the costa where they form black dots and along a segment of the antemedial line near the claviform spot. The antemedial line is laterally convex at the trailing margin and is preceded by a light gray line. The postmedial line is dentate but faint and is followed by a light gray line. The subterminal line is light but variable, sometimes lighter gray near the apex or forming a series of diffuse ochre spots. The orbicular spot is black, thin or open anteriorly, large, oval, and filled with slightly lighter reddish gray than the ground color. The reniform spot is faint, often with the black outline reduced to the medial portion, and is filled with similar pale color as the orbicular spot. The claviform spot is variable, usually only evident as a smudged black mark representing the anterior portion. The hindwing is dull brown-gray with darker gray toward the margin, a faint discal spot, and a lighter gray fringe with a pink tint in some specimens. The head and thorax are reddish gray with a lighter gray tip to the collar in some individuals. The male antenna is broadly bipectinate, about 6x as wide as the central shaft.

Xestia praevia can be recognized by its reddish gray color, relatively large spots, and limited dark markings that are evident along the costa, in the cell between the spots, and near the forewing base. It is most similar to Aplectoides condita but this species has a much narrower male antenna, is grayer that X. praevia with limited red-brown patches, and has paler whitish filling of the forewing spots. Xestia praevia also resembles Coenophila opacifrons, a rarely collected species that is limited to eastern British Columbia in our region. It also has a broad male antenna, but lacks a basal dash and most other dark markings at the wing base, has a smaller orbicular spot, and is gray without diffuse red suffusion.

Xestia is a large and diverse genus found throughout temperate, alpine, and arctic portions of the Northern Hemisphere. The genus is subdivided into three subgenera, Xestia, Megasema, and Pachnobia, by Lafontaine (1998). The genus is defined by a thumb-like ventral extension called the pollex which arises from the base of the clasper of the male valve. Over half of the North American species are found in the Northwest. Xestia praevia belongs to the subgenus Xestia.

Larva is smooth, dark gray with white dorsal and lateral lines and dorsal-lateral black chevrons.  It is illustrated by Lafontaine (1998).

This species is widely distributed in boreal spruce-fir forests across Canada, extending westward to the northern Rocky Mountains.

Xestia praevia occurs in central and south-central British Columbia in the Northwest. It has not been found south of Canada in our region.

This species occurs in a narrow north-south distribution from the Northwest to the Atlantic near the Canada-United States border. The distribution is limited to Canada except in the upper Midwest, New England, and in the Appalachian Mountains from West Virginia to North Carolina.

Lafontaine (1998) gives the flight period as late June to mid-August.