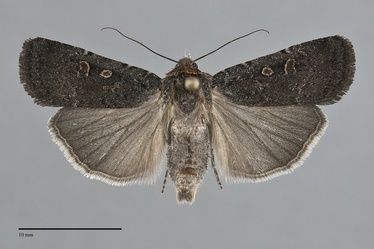 Abagrotis duanca is a relatively small Abagrotis species (FW length 14 - 15 mm) that comes in two distinct color forms. The more common form is dark gray and the other is red-brown. It is common east of the Cascade and Coast Ranges during the summer. The dark gray form is nearly homogeneous except for the terminal area that is slightly lighter gray. The red form usually has dark gray preceding the subterminal line and a terminal area that is slightly lighter red than the ground color. The transverse lines are darker than the ground color with lighter filling and more evident in the gray form that in the red one. The pale subterminal line is a complete line, a series of dots, or absent and is similar in both forms. The pale outlines of the orbicular spot and reniform spot are also similar in the two forms. Both are filled with the ground color. The orbicular spot is small and round. The reniform spot is also fairly small. The claviform spot is absent. The hindwing is dark brownish-gray, darker toward the margin with slightly darker spot and veins. The hindwing fringe is two-toned dark and light gray. The head and collar match the forewing or are contrasting even light orange-brown. The rest of the thorax matches the wing color. The male antenna is filiform.

Larva is smooth, mottled gray, brown, black, and orange with a paler gray lateral band.  It is illustrated by Miller & Hammond (2003).

This species occurs in arid rangelands, dry forests, and middle-elevation ridges.  In the Pacific Northwest, it is common in juniper woodlands and on dry, open sagebrush steppe at middle to low elevations east of the Cascades.  Numbers of this species were greatly reduced on sagebrush steppe burned over in a wildfire during the previous two years, compared to adjacent unburned habitat.  This species appears to be intolerant of fire disturbance due to the loss of the sagebrush foodplant.

Abagrotis duanca is found throughout the Pacific Northwest east of the summit of the Cascade and Coast Ranges. It has not been found in Idaho north of the Snake River Plain nor in western Montana.

This species is found throughout a large portion of western North America as far north as southern Canada. The eastern limits of its range is on the western Great Plains from southwestern Saskatchewan to northern New Mexico and the southern limit is northern New Mexico, northern Arizona, and southwestern California. It does not occur in western portions of the Pacific Coast states nor on Vancouver Island.

Abagrotis duanca has a long flight season. It occurs slightly earlier in the year than most other Abagrotis species and has been collected as early as late May in the Northwest. Records for our region extend to early September.