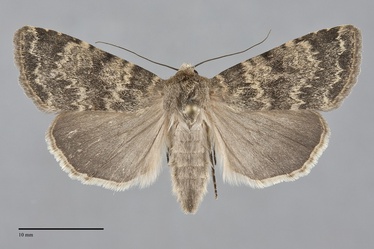 Pronoctua craboi is a rarely collected moderately large (FW length 18 - 20 mm) dark olive-gray species with lighter gray-ochre filling of the lines and spots that is found in rocky habitats near timberline. The forewing is nearly completely brown-gray with a slight olive cast, occasionally with lighter areas in the median area. The basal and terminal area area slightly darker than the rest of the wing, as is the diffuse median line. The lines are similar gray, double and filled with lighter gray ochre and evident mostly as the lighter filling. The basal and antemedial lines are slightly irregular. The postmedian line is dentate. The subterminal line is light and resembles the light filling of the other lines. It is irregular and forms weak W-marks on the veins near the apex and on veins M3 and CuA1 in the middle of the wing. The spots are pale, similar to the filling of the lines, with central filling of the ground color. The orbicular spot is round and the reniform spot is kidney shaped. The claviform spot is absent. The hindwing is medium dark gray-brown with darker gray suffusion at the margin, faint gray discal spot and veins, and a two-toned lighter fringe. The head and thorax are olive-gray. The male antenna is bead-like.

Pronoctua craboi and Pronoctua peabodyae can be told from Pronoctua typica by the terminal area that is darker than the rest of the wing, lighter in P. typica. Pronoctua peabodyae is usually found in lower elevation habitats than P. craboi, but they occur together on ridges in the Cascade Mountains in Washington. Pronoctua craboi tends to be slightly larger than P. peabodyae and its pattern of light lines is more contrasting with the dark ground color giving the impression of a dark moth with light lines in P. craboi as opposed to a mottled dark moth in P. peabodyae. These species differ in the shape of the vesica of the male genitalia as described in Lafontaine (1998).

This species is found in rocky subalpine and alpine habitats near timberline.  It is usually rare and sporadic even in its proper habitat.

Pronoctua craboi has been found at high elevations in the Purcell and Coast Range Mountains of southern British Columbia, the Wallowa Mountains in north-eastern Oregon, and the Cascade Mountains in Washington.

This species also occurs in the high Rocky Mountains in Wyoming and Colorado. It has been found at over 11000 feet elevation in the Wind River Range in Wyoming.

The adults are single brooded and fly in July and August. They are nocturnal and come to lights.