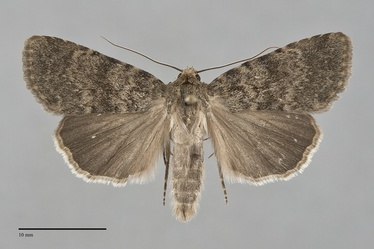 Pronoctua peabodyae is a dull olive-gray, brown-gray, or rarely reddish gray-brown, medium to moderately large noctuid moth (FW length 16 - 20 mm) that is found in dry habitats in the Pacific Northwest. Its forewing has an indistinct pattern of wavy light lines and faint spots. The ground color is powdery, due to being mottled and having a mixture of dark and light scales. The terminal area and shade preceding the subterminal line are slightly darker gray than the rest of the wing. The basal, antemedial, and postmedial lines are double, darker gray than the ground color and darkest at the costa, and are filled with a lighter shade of the ground color. The median line is darker gray but diffuse. The antemedial line is irregular and oriented slightly oblique to the wing. The postmedial line is dentate with light spots on the veins at the tip of the teeth in some individuals. It is slightly drawn toward the base of the wing opposite the reniform spot. The subterminal line is light and slightly irregular. The orbicular spot is very faint and is filled with similar light scales as the lines. The reniform spot is also faint but is either similar and filled with pale or filled with slightly darker scales than the ground color. The claviform spot is absent. The hindwing is dark olive-gray near the base and darker gray toward the margin. The fringe is striped with yellow at the base, a thin dark line, and paler whitish toward the apex. The head and thorax match the forewing ground color. The male antenna is bead-like.

Pronoctua peabodyae can be told from Pronoctua typica by its smaller size, less well-defined forewing markings, and darker hindwing. In addition, the terminal area in P. peabodyae is darker than the rest of the wing and lighter in P. typica. Pronoctua peabodyae resembles Pronoctua craboi with which it flies in a few locations on ridges on the east slope of the Cascade Mountains in southern Washington. The forewing maculation of P. craboi is more sharply defined and the light filling of the irregular lines are the dominant feature while the markings on the wing of P. peabodyae are less distinct and lack prominent light elements. The base of the hindwing is also darker in P. peabodyae than in P. craboi. Pronoctua peabodyae is superficially identical to Pronoctua pyrophiloides and cannot be told from it without dissection. Pronoctua pyrophiloides is limited to southern Oregon while P. peabodyae has a wider range that includes most of the Pacific Northwest to southern Canada. The sclerotized spined plate in the male vesica of P. peabodyae is located on the right side, opposite the subbasal diverticulum; in P. pyrophiloides this plate is located on the dorsal vesica 90° from the subbasal diverticulum. These differences are illustrated in Lafontaine (1998). Females are identical and cannot be differentiated from each other.

This species is widely distributed throughout much of western North America in spruce-fir forests at higher elevations and in ponderosa pine forests at middle elevations, but has also been found in dry sagebrush steppe at lower elevations. It is associated with habitats with a rocky substrate. It is usually uncommon to rare.

Pronoctua peabodyae has been found in the Coast Range of south-eastern British Columbia and in the Cascade Mountains of Oregon and Washington. It also occurs near the Columbia River in the Columbia Basin.

This species appears to feed on herbaceous vegetation such as clovers (Trifolium spp.) in the Fabaceae.

Adults have a long flight season with records from late May to early September in the Pacific Northwest. In general, the early records are from low-elevation locales and the later ones from higher elevations. However, some the presence of early and late records from some locations suggest that this species is double-brooded at at least some locations.