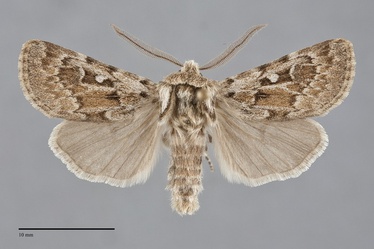 Agrotis longicornis is a small to medium-sized moth (FW length 14 - 17 mm) that flies in sand habitats of southeastern Oregon during early summer. It has a warm orange-tan forewing marked with silver-gray and black, and a wide, bipectinate male antenna. The forewing is gray-orange with lighter silver-gray along the costa. The medial subterminal area is lighter gray-tan. The lines are dark gray, with silver gray filling on the side opposite the median area. The antemedial line is irregular with a prominent lateral loop near the trailing margin. The postmedial line is dentate, laterally convex near the cell and then oblique toward the base to the trailing margin. The pale subterminal line is preceded by ill-defined gray spots. The orbicular and reniform spots are black with pale filling. The orbicular spot is a small oval, entirely filled with silver gray. The orbicular spot is filled with similar gray medially and the ground color laterally. The claviform is small and black. The hindwing is light gray with a tan tint. The discal spot and veins are faintly darker and the fringe is lighter. The head and collar are uniform light tan-gray. The tegulae are lighter with dark gray and tan margins. The central thorax is light gray-brown. The male antenna is widely bipectinate, 7X as wide as the central shaft.

This species can be told from other late spring and early summer desert-flying moths by the warm brown forewing with light-filled spots. Males are easily told by the broad antennae. The most similar species is Protogygia arena which also flies in sandy desert environments. It has a much duller brown gray forewing, lacks a white component to the antemedial and postmedial lines, and has a much narrower male antenna.  Agrotis daedalus is similar and flies in similar sand habitats in northern Nevada.  It is streakier, lacking transverse lines on its forewing, has a much longer claviform spot than A. longicornis, and lacks a wide, bipectinate antenna.

This species is narrowly endemic to sand dunes or dry, open areas with loose, sandy soils at low elevations in the Great Basin region.  It apparently does not occur on upland sagebrush steppe.

This species has been found in south-central and south-eastern Oregon in our region.

Agrotis longicornis has a limited range in western North America. South of our region it is known from Modoc County in north-eastern California, central Nevada, and the central valley of California near Bakersfield.

Adults are on the wing in late spring and early summer. Our Pacific Northwest records are from late May to mid-June.