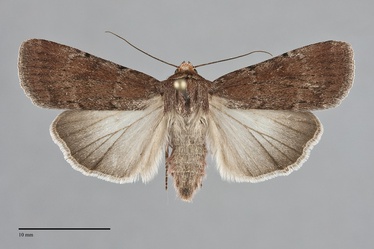 Tesagrotis atrifrons is a brick-red, medium-sized noctuid moth (FW length 15 - 17 mm) with black transverse lines, a black frons ("face"), and a black line on the prothoracic collar. The forewing is dull brick-red with a slight gray cast, slightly lighter in the terminal area and grayer along the costa. The antemedial and postmedial lines are similar, double, black with gray filling. Both lines form dark spots at the costa but are faint elsewhere. The tips of the teeth of the scalloped postmedial line are evident as short dark lines in some specimens. The subterminal line is faintly visible in a minority of specimens. The reniform spot is evident as a faint dark smudge in some specimens; the orbicular and claviform spots are absent. The hindwing is light whitish-gray with a slight sheen. The margin, including the veins and fringe, and faint discal spot are gray. The frons of the head is black. The top of the head and the base of the collar are orange brown. The mid collar bears a thin black transverse line. The distal collar and the rest of the thorax are red-brown and match the forewing. The male antenna is filiform.

This species can be told from the similar variable species Tesagrotis piscipellis by the thin black line on the collar, absent in all but the darkest specimens of T. piscipellis. Tesagrotis amia and Tesagrotis corrodera both lack a black frons on the head. Other similar-sized red-brown moths in the range of T. atrifrons, like Euxoa excogita, also lack a black frons and have more evident spots on the forewing.

This species is widely distributed in dry forests and woodlands throughout much of western North America.  In the Pacific Northwest, it is mostly limited to open, dry ponderosa pine forests and juniper woodlands at middle elevations east of the Cascades, and is usually rare and sporadic.

Tesagrotis atrifrons occurs in association with bitterbrush from southern British Columbia through much of eastern Washington, the Idaho Panhandle, and western Montana. Its range extends south through the Cascade Range in Oregon. There is a single record for southern Idaho in Lafontaine (1998).

This species is most commonly collected outside the Northwest in the southern Rocky Mountain region from southern Wyoming to northern Arizona and southern New Mexico. It also occurs in southern Nevada and eastern and southwestern California.

This species is a foodplant specialist feeding on bitterbrush (Purshia tridentata) in the Rosaceae.

Adults of Tesagrotis atrifrons have been found from early July to early September in our region. They are nocturnal and come to lights.