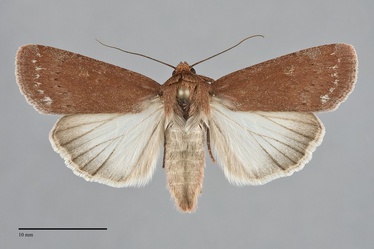 Tesagrotis piscipellis is the most variable species in the genus. It is a medium-sized moth (FW length 16 - 17 mm) with a black frons ("face") and a bright brick red to washed-out reddish gray forewing that lacks markings other than faint black lines bordering the median area and a spotted ochre subterminal line. The forewing is uniform dull medium dark red-brown, often slightly lighter orange-brown, with or without slight gray suffusion along the trailing margin in the terminal area. The antemedial and postmedial lines are single, black, variable from absent except at the costal margin, evident only as dark lines at the tips of the teeth of the scalloped postmedial line, to dark and complete. The subterminal line is a series of diffuse ochre to slightly greenish spots between the veins. A similarly colored faint streak is present from the end of the cell to the subterminal line in a few individuals. The spots are absent except for a faint smudge at the reniform spot in a minority of specimens. The hindwing is light whitish gray with dark veins and gray at the margin, heaviest in females, and lacks a discal spot. The top of the head and the entire thorax, including the collar, are uniform red-brown and match the forewing. The male antenna is filiform.

This species is most likely to be confused with Tesagrotis atrifrons, but differs from it by the absence of a complete black line on the prothoracic collar. Some specimens have a trace of a dark line above the head near midline, but this mark does not extend across the width of the thorax. Most specimens of T. piscipellis are lighter than T. atrifrons, and the pale subterminal spots found in many T. piscipellis are usually not evident in T. atrifrons. The other two Tesagrotis species lack the black frons of these two species, as do other red-brown moths such as Euxoa excogita.

This species is widely distributed in dry forests and woodlands.  In the Pacific Northwest, it is common in dry, open ponderosa pine forests and juniper woodlands at middle elevations east of the Cascades, and is particularly abundant in lodgepole pine forests on soils of volcanic ash and pumice along the east slope of the Cascades.  It also occurs in dry meadows at high elevations along the summit of the Cascades and in oak woodlands of southwestern Oregon at low elevations, but is usually rare and sporadic in these habitats.  This species is intolerant of fire disturbance, and is mostly eliminated from habitat recently burned in wildfires.

Tesagrotis piscipellis is most commonly found along the east slope of the Cascade Range in eastern Washington and Oregon, but occurs further east in the Blue Mountains of Oregon and Washington. It has also been found in south-eastern British Columbia and southern Idaho.

This species is widely distributed in the southern Rocky Mountain region, particularly throughout the Four Corner States. It also occurs in the Great Basin and in eastern and southwestern California and in the Black Hills of South Dakota and Wyoming.

This species is a foodplant specialist feeding on bitterbrush (Purshia tridentata) in the Rosaceae, but it must also feed on other shrubs such as serviceberry (Amelanchier spp.) in the Rosaceae at high elevations in the Cascades and in oak woodlands of southwestern Oregon.

Tesagrotis piscipellis is common from late June to mid-September in our region. The adults are nocturnal and come to lights.