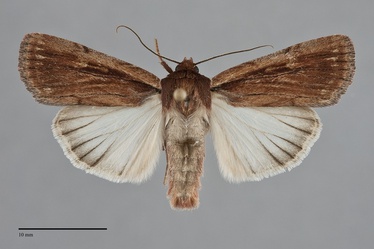 Tesagrotis corrodera is a longitudinally streaked, red-brown medium-sized moth (FW length 16 - 18 mm) with a light brown to ochre costa and black veins and basal dash. The ground color of the forewing is rusty red-brown with a lighter ochre-brown costa. Similar ochre brown is present along many of the veins and forms streaks through the cell, including through the spots, to the outer margin, and between the veins in the terminal area. The veins are black, along the entire length of the cubital vein and 1A+2A and near the margin the other veins. A black basal dash is present. The transverse lines are only evident as dark spots at the costa. The orbicular and reniform spots are evident as lighter ochre-brown filling that blends with the pale streak through the cell. The claviform spot is absent. The hindwing is white with a slight sheen, with dark gray distal veins and a marginal shade that is most extensive in females and a white fringe with an incomplete inner gray component. The head and thorax are entirely red-brown, lacking a black frons ("face") and barring on the collar. The male antenna is filiform.

Tesagrotis corrodera has the most streaky forewing of any Tesagrotis species but is most readily identified by the uniform red-brown color of the head and thorax that lacks black markings. The other red-brown species, Tesagrotis piscipellis and Tesagrotis atrifrons, have a dark brown or black frons in addition to smoother-colored forewings.

The type locality of Noctua corrodera Smith is Pullman, Washington.

Larva is smooth, mottled light brown or green-brown with darker dorsal chevrons and an undulating or wavy black and white lateral stripe.  It is illustrated by Miller & Hammond (2003).

This species is widely distributed in dry forests and woodlands throughout much of western North America.  In the Pacific Northwest, it is usually rare and sporadic in dry, open ponderosa pine forests and juniper woodlands at middle elevations east of the Cascades.  It is most frequent in pine forests along the east slope of the Cascades, and is particularly common in dry lodgepole pine forests on soils of volcanic ash and pumice.

This species is most commonly found along the east slope of the Cascade Mountains from southern British Columbia to southern Oregon. It has also been collected in the Blue Mountains in south-eastern Washington and in southern Idaho.

This species is found in eastern California, northern Nevada, Utah, southern Wyoming, western Colorado, and southeastern Arizona outside of our region.

This species is a foodplant specialist feeding on bitterbrush (Purshia tridentata) in the Rosaceae.

The adults fly during the summer months and have been found from late June to mid-September in the Northwest. They are nocturnal and come to lights.