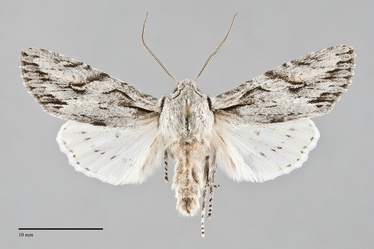 Egira crucialis is a common and widely-distributed medium-sized (FW length 16 - 20 mm) spring-flying moth with a long light gray forewing with longitudinal black markings, an oblique black median line from the costa to the reniform spot, and a red flush in the reniform spot in combination with a white hindwing. The forewing is relatively long with an elongate but rounded apex. The color is pale gray lightly dusted with darker scales; occasional dark brown-gray melanic specimens exist. The anterior wing base is paler gray. A red flush is usually present adjacent to the lateral reniform spot. The terminal area is dusted with gray to solid dark gray opposite the cell and in the fold. Several black lines between veins extend through these darker areas from the distal subterminal area to the outer margin. An anterior-convex curved black line is present posterior to the distal cell, possibly a portion of the inferior reniform spot but appearing separate from it. A short black line is present along the radial vein in the medial cell. A thin basal dash is black inferiorly and white to pale gray anteriorly. The basal line is absent. The antemedial line is limited to two gray spots on the costa. The median line is bent 90° at the reniform spot and is angled toward the base anterior and posterior to the spot. The anterior segment is thick dark gray to black and the posterior segment is paler gray to brown-gray. The postmedial line is faint gray, often reduced to a series of small black spots on the veins, lightly scalloped when visible, strongly excurved from the costa around the end of the cell and then strongly angled toward the base below the reniform spot. The subterminal line is evident as the transition from the pale subterminal area to the darker terminal area. The terminal line is a series of dark gray triangles between veins. The fringe is gray. The orbicular spot is very large, an elongate oval filling most of the medial cell, partially outlined in dark gray to black but open anteriorly and posteriorly, filled with the ground color or slightly paler gray. The reniform  spot is large, partially outlined in black medially and inferiorly and filled with the ground color anteriorly and medially, gray inferiorly, and diffuse red-brown centrally and laterally. The claviform spot is black, usually partially open anteriorly, long, usually reaching the median line, and filled with the ground color. The hindwing, including the fringe, is pure white with gray small round discal spot, gray lines on the veins marking the postmedial line, and a spotted terminal line. The head and thorax are pale to medium gray with a black V-shaped line across median collar and black lateral edges on the tegulae. The anterior thorax has a slight crest. The eyes are covered with fine hairs. The male antenna is asymmetric, pectinate anteriorly and serrate posteriorly.

This species can be identified by its light gray forewing marked with a black basal dash, a black curved line below the reniform spot, a very large incomplete orbicular spot, and a red flush in the lower reniform spot. It is quite similar to Egira simplex and can be difficult to distinguish from it. Egira simplex lacks the red flush in the reniform spot of E. crucialis and tends to be slightly warmer brown or reddish gray - most evident when specimens are compared side-by-side - with a less crisp pattern. The hindwing of E. simplex is slightly brownish while that of E. crucialis is pure white, and the discal spot and postmedial line are larger and darker than those of E. crucialis. Egira vanduzeei, a species that is restricted to the Pacific Coastline in southwestern Oregon, resembles E. crucialis but has reduced forewing markings consisting of longitudinal black lines and lacks the other markings found in E. crucialis.

Some specimens from the western part of the range are melanic, usually dark gray to gray-brown. These tend to be less dark than melanic specimens of E. simplex.

Larva is smooth, finely mottled in highly variable colors of pink-red, gray, and black.  It is illustrated by Miller & Hammond (2003).

This species is widely distributed throughout much of western North America in moist forest and riparian habitats.  In the Pacific Northwest, it is particularly abundant in coastal rainforests, mixed hardwood forests, riparian zones along creeks and rivers, oak woodlands, and brushlands at low elevations west of the Cascades.  It is also common in mixed hardwood-conifer forests at middle elevations along the west slope of the Cascades and in the Rocky Mountain region, and in dryer ponderosa pine forests east of the Cascades.

This moth is widespread in the Northwest as far north as southern British Columbia where it occurs on both sides of the Cascade Mountains. The eastern limits of its range are southeastern British Columbia and the Idaho Panhandle. It is found commonly west of the mountains to southern Oregon. East of the mountains it is common around the periphery of the Columbia Basin and in the Blue Mountains of Oregon. It does not appear to be found further south in the Basin and Range or Snake River Plain regions.

Egira crucialis is found throughout most of western and central California. The range extends eastward to the Rocky Mountains through Arizona and New Mexico, thence northward through Colorado, western Wyoming, and western Montana. Only a few records are shown from outside the Northwest and California on the Moth Photographers Group website suggesting that this species is uncommon except in this region.

This species is a generalist feeding on many kinds of hardwoods, including the families Fagaceae, Betulaceae, Salicaceae, Cornaceae, Rhamnaceae, and Rosaceae.

The flight period of E. crucialis is early spring, beginning in early March and lasting through May. It is nocturnal and comes to lights.