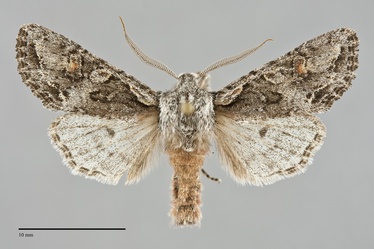 Egira hiemalis is a small to medium-sized moth (FW length 13 -  17 mm) that flies in the early spring throughout much of the Northwest region. It has a mottled gray to reddish-gray forewing with a reniform spot with a central patch of red scales. The forewing has an elongate slightly pointed apex. The color is silver-gray with darker gray mottling. Specimens from west of the Cascades are darker than those from east of the mountains and have a red flush across the entire wing, not just in the reniform spot. The base anterior to a curved black basal dash is contrasting lighter gray, as is the subterminal area in the fold. The terminal area is usually darker gray, darkest opposite the cell and in the fold. The basal, antemedial, and postmedial lines are dark gray, double with filling of the ground color or slightly lighter gray. The basal line is only evident on the costa. The antemedial line is variable, absent except on the costa to complete, slightly irregular and oblique toward the outer margin. The median line is dark gray, usually evident from the costa to the reniform but occasionally complete. The postmedial line is variable, usually visible as a strongly oblique segment anterior to the reniform spot and faintly on the posterior margin, sometimes complete. When visible it is scalloped lateral to the reniform spot and strongly angled toward the base below the spot. The subterminal line is pale whitish gray to pink, with a weak W-mark on M3 and CuA1 and smoothly concave toward the base anterior and posterior to this mark. It is preceded by a black shade or spots below veins M1 and M2 and in the fold. The terminal line is a series of black spots between the veins. The fringe is gray with a thin median line. The orbicular spot is gray to black, incomplete anteriorly and posteriorly, a moderately large oval filled with light gray to pink, often with a central ocellus. The reniform spot is black, broadly kidney-shaped to weakly hourglass-shaped, filled with the ground color peripherally, a black spot inferiorly, and red centrally. The claviform spot is gray to black, often incomplete or absent, small to moderately large in size. The hindwing is pale gray with a dusting of darker gray scales, slightly pink-tinted in reddish specimens, with gray veins, a diffuse discal spot, weak postmedial line, and a thin terminal line. The hindwing fringe matches the ground color. The face is light gray. The top of the head and the thorax are light gray, slightly reddish brown in reddish specimens, with a dark gray V-shaped line across the anterior collar and black along the lateral tegulae. The thorax is sculpted with a ridge across the collar and a median crest. The eye is covered with fine hairs. The male antenna is widely bipectinale.

This species can usually be identified by its mottled gray forewing with a black basal dash and red in the central reniform spot. Populations with heavily red-suffused wings are especially distinctive. Males are distinguished from most other Egira species by the widely bipectinate antennae.

Egira hiemalis is geographically variable in our region, as discussed above. Specimens from west of the Cascades are darker and more colorful than those from east of the crest, usually with a strong red cast on the entire forewing.

This species is widely distributed throughout much of western North America in forest and brushland habitats.  In the Pacific Northwest, it is particularly abundant in coastal rainforests, mixed hardwood forests, riparian zones along creeks and rivers, oak woodlands, and dry brushlands at low elevations west of the Cascades.  It is also common in mixed hardwood-conifer forests at middle elevations along the west slope of the Cascades.  However, it is less common in drier ponderosa pine forests and juniper woodlands at middle to low elevations east of the Cascades.

Egira hiemalis is widespread on both sides of the Cascade Range as far north as southern British Columbia. The range extends as far east as the Idaho Panhandle. A single record exists for south-central Idaho.

This is a West Coast moth. It is found commonly in California except in the far eastern part of the state. A single record is shown for Arizona on the Moth Photographers Group website.

Egira hiemalis is appropriately named because it is one of the earliest moths to appear in the spring (hiemalis refers to winter). Records for the Pacific Northwest begin in January and extend to early May.