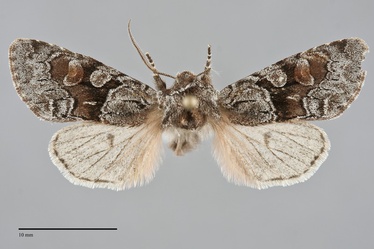 Egira variabilis is, as the name suggests, a variable moth. It is medium-sized (FW length 15 - 17 mm) with warm red-brown and ochre colors on a blue-gray to charcoal gray forewing and a powdery gray hindwing that occurs sporadically in conifer forests and flies during early spring. The distal wing is elongated with a rounded apex. The color is some shade of gray - specimens without heavy dark suffusion or powdery medium-gray to blue gray. The entire median area except the costa is rusty brown, darkest gray to nearly black medially. A thin black basal dash is present. Dark gray shading is present on the costa and posterior margins medial to the subterminal line. The veins are black across the subterminal area. Heavily suffused specimens are nearly entirely charcoal gray with a warm rusty suffusion in the median area, except that the terminal area is powdery dark gray, with obscured pattern details of the dashes, veins, and lines. The basal, antemedial, and postmedial lines are dark gray, double filled with the ground color. The basal line is incurved from the costa to the cubital vein. The antemedial line is slightly irregular and broadly arced toward the outer margin. The median line is diffuse, blending with the surrounding dark shade. The postmedial line is lightly scalloped, S-shaped with convex lateral segment opposite the cell and concave segment on the posterior wing. The subterminal line is pale gray across most of the wing and thick on pale ochre near the anal angle, sinuous with a weak W-mark toward the margin on M3 and CuA1. The fringe is concolorous with the terminal area, weakly checkered in some specimens. The orbicular spot is moderately large approaching or touching the reniform spot, oval to nearly round, outlined in black but open toward the costa, filled with pale gray, blue gray, rust, or light yellow scales. The reniform spot is large, broadly kidney-shaped, black filled with gray, rust, or light ochre or some combination thereof. The claviform spot is absent. The hindwing is light gray to pink evenly dusted with gray, with darker gray veins, discal spot, and thin terminal line. The fringe is slightly paler than the ground color. The head and thorax are red-brown and gray or charcoal gray with a silver-gray edge on the collar. The surface of the eye is covered with fine hairs. The male antenna is bipectinae.

This species can be usually be distinguished from other early spring moths despite its variable appearance by the gray and rust-brown color in combination with a yellow and black mark at the posterior subterminal line.

This species is widely distributed in coniferous forests of western North America, and is particularly common to abundant in ponderosa pine forests of the southern Rocky Mountains.  It is usually rare and sporadic in the Pacific Northwest where it is found in low to middle elevation conifer forests. The apparent scarcity of this moth might be related in part to limited collecting in the proper habitat early in the year.

Egira variabilis has a spotty distribution in our region. It has been found most consistently in the Selkirk Mountains in southeastern British Columbia and in the Idaho Panhandle, as well as in the Siskiyou Mountains in southwestern Oregon. Isolated records in the Cascade Region include the Upper Skagit River Valley in British Columbia, Seattle's Magnolia neighborhood, and Yakima County, Washington.

This species is found in California, the Southwest, and the southern Rocky Mountains outside of our region.

This species is a foodplant specialist feeding on conifers (Pinaceae), and particularly prefers pines (Pinus spp.). It is often found in association with sclerophyllous Ericaceae such as bearberry and manzanita (Arctostaphylos spp.) but is not known to feed on them.

This species, like other Egira species, flies in the early spring. It has been found in March and April in our region.