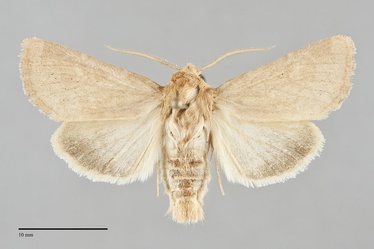 Nephelodes demaculata is a pale medium-sized noctuid moth (FW length 16 - 17 mm) that resembles a yellowish washed-out Nephelodes minians and flies in eastern Oregon in our region. The forewing is nearly uniform light yellow-brown to red-brown, usually with slightly darker median area. The lines and spots are similar to those of N. minians although often nearly obsolete. The pale filling of the reniform spot and slightly lighter terminal area can usually be made out even if the other markings are lacking. The hindwing is pale, ranging from unmarked light yellow to pale whitish gray with slight gray suffusion toward the outer margin and a white to pink fringe. The head and thorax match the forewing ground color. The eye is covered with fine hairs and the male antenna is moderately bipectinate.

This species is very similar in size and pattern to N. minians, differing mainly in color and strength of the markings. Compared to N. minians it has a more yellowish color and the markings are nearly obsolete. The darker median area of N. minians is less contrasting or similar to the rest of the wing in N. demaculata. Nephelodes demaculata also resembles three species in the tribe Apameini: Apamea niveivenosa, Resapamea innota, and Amphipoea senilis. Males of Nephelodes have wider antennae than any of these species but they are best separated by noting the presence or absence of hairs on the eyes, present in Nephelodes but absent in the other species. When visible, the antemedial and postmedial lines of Nephelodes demaculata are smooth while those of these other species are irregular and scalloped, respectively.

This moth is probably only a subspecies of N. minians that is endemic to central Oregon.  Intermediate populations are found south of the Blue Mountains in central Oregon, for example in the wet meadows along the South Fork of the Crooked River in Crook Co. Oregon.  It is common to abundant in wet meadows along creeks and rivers in open ponderosa pine forests along the east slope of the Cascades at middle elevations.  It is usually uncommon or rare in mountain meadows at high elevations along the summit of the Cascades, and in dry, open sagebrush steppe at low elevations east of the Cascades.

Nephelodes demaculata is found in eastern Oregon from the Blue Mountains south. It might occur in southern Idaho but has not been found in Washington or British Columbia and is unlikely to occur there.

The range of this species extends south through eastern California to the southern Sierra Nevada.

This species is a foodplant specialist feeding on grasses (Poaceae.)

Nephelodes demaculata flies in late summer and early fall. It has been collected from late July to September, slightly earlier than the peak flight of N. minians in our area. It is nocturnal and comes to lights.