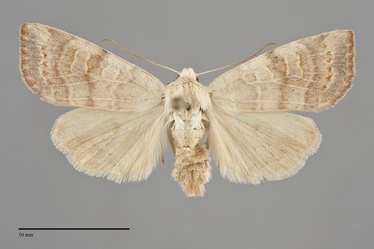 Anathix aggressa is a small, pale yellow-tan moth (FW length 13–15 mm) that flies in steppe and foothills during the fall. It has a forewing with smooth lines, large spots, and a pale blue-gray terminal area, and an immaculate light yellow hindwing. The forewing is relatively short and broad with a slightly pointed apex. Pacific Northwest specimens are very pale yellow-tan, slightly darker tan to gray in the subterminal area and pale blue-gray in the terminal area. Some specimens are mottled with light orange-tan. The veins on the mid-wing are pale. The basal, antemedial, and postmedial lines are a slightly darker shade of the ground color, double filled with the pale ground color, often relatively obscure. The basal and antemedial lines are very faint, smoothly excurved. The median line is light gray, diffuse, angled slightly at the lower reniform spot. The postmedial line is very smoothly and broadly curved across the entire distal wing. The subterminal line is pale, very even and nearly parallel to the outer margin. It is preceded in some specimens by a few small red-brown or black spots between the veins on the mid-wing. The terminal line is absent. The fringe is red-orange. The orbicular and reniform spots are outlined thin outer red-brown and inner pale line. The orbicular spot is faint, round or ovoid, filled with the ground color. The reniform spot is moderately large and weakly hourglass-shaped, with filling of the ground color or pale orange and very light gray in the lower end in a few specimens. No claviform spot is evident. The hindwing is light yellow or yellow-tan with a faint discal spot. A slightly darker submarginal band is present in a few specimens. The head and thorax are light yellow or orange. The male antenna is bead-like.

This species can be recognized by its pale yellow color on both wings and pattern of pale smooth lines and large reniform spot. It is most similar to Anathix puta, a species that flies in aspen forests and riparian areas in foothills at the same time of year as A. aggressa. It is usually much grayer. Some pale specimens resemble A. aggressa but have a darker hindwing with dorsal gray suffusion. Sunira decipiens, another fall-flying species that occurs in foothills, is usually more mottled and has a more distinct pattern than A. aggressa. Its subterminal line is irregular, not smooth as in A. aggressa.

This species is geographically variable. Populations from the Great Plains are grayer than those from the Northwest, more closely resembling A. puta.

This species is found in western North American riparian forests with cottonwoods.  In the Pacific Northwest, it occurs in cottonwood forests along creeks and rivers at low elevations east of the Cascades, but has also been collected in open steppe removed from cottonwoods or aspens. It is uncommon to rare.

Anathix aggressa is found in the dry interior of our region as far north as the northwestern Columbia Basin in Washington. It occurs in far eastern Oregon as well as on the Snake River Plain in southern Idaho.

This species is found on the Great Plains from central Alberta and Saskatchewan to Missouri, Oklahoma, and Colorado. It also occurs in the Intermountain region and in southern California.

This species is a foodplant specialist feeding on cottonwoods (Populus spp.) in the Salicaceae.

The flight period of this moth is during the fall. All Pacific Northwest records are from September. It is nocturnal and comes to lights.