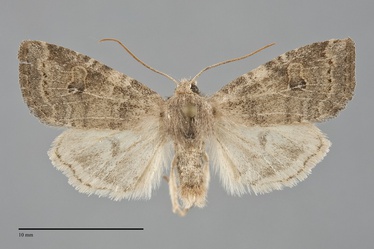 Anathix puta is a small moth (FW length 12–15 mm) with short broad forewings that are orange-brown suffused with gray with a pattern that includes an even curved postmedial line, variable dark spots preceding the subterminal line, and a figure-eight-shaped reniform spot with a diffuse gray spot in the lower end. It usually flies near aspens during early fall. The forewing is relatively short, broad, and blunt, although the apex is weakly falcate in some specimens. The color is mottled orange-brown to gray-tan, slightly darker at the base, along the costa, and in the terminal area which tends to be gray. Almost all specimens are diffusely suffused with gray. Some specimens have light veins on the mid-wing. The basal, antemedial, and postmedial lines are a dark shade of the ground color, double filled with the ground color or bluish gray, often relatively obscure. The basal line is excurved. The antemedial line is angled toward the outer margin, waved with lateral-convex segments at each end and more diffusely across the mid-wing. The median line is orange-brown to gray-brown depending on the color of the rest of the wing, diffuse and slightly irregular, angled from the costa to the lower reniform spot where it is bent to run perpendicular to the posterior margin. The postmedial line is very smoothly and broadly curved around the reniform spot, bending toward the posterior margin at CuA2, not far above the margin. The subterminal line is pale, very even and nearly parallel to the outer margin. It is preceded in some specimens by brown or black spots between the veins across the wing except at the margins. The terminal line is a series of faint spots. The orbicular and reniform spots are outlined an outer red-brown and inner pale line. The orbicular spot is round, often open toward the costa, filled with the ground color. The reniform spot is moderately large, weakly figure-eight-shaped with gray filling of the lower third. No claviform spot is evident. The hindwing is light tan, sometimes with an orange tint, suffused with gray that is darkest in the submarginal area and spares the margin. A diffuse discal spot is present. The fringe is off-white, often with an orange or pink cast. The head and thorax are gray-tan to orange-tan. The male antenna is bead-like.

This moth can be recognized by its short and broad wing shape, the tan to orange-tan color with dirty gray suffusion on the forewing, smooth postmedial and subterminal lines, and pale hindwing with gray suffusion. The most similar species in our area is Anathix aggressa. Pacific populations of this moth are pale yellow-tan. A few specimens of A. puta have a similar color but can be distinguished by the gray shading of the dorsal hindwing, lacking in A. aggressa. Agrochola purpurea is a slightly larger moth that is otherwise similar to A. puta in color. It has a black mark on the distal costa that A. puta lacks. Sunira species can also be similar to A. puta but have irregular subterminal lines.

A specimen of Anathix ralla bearing a label from Gott Peak in the British Coast Range exists in the Strickland Museum at the University of Alberta. This is a golden yellow moth with gray lines, filling of the lower reniform spot, and spotted distal wing. Its range is eastern North America. This specimen was labelled by Jim Troubridge at the time that he was exchanging specimens with a collector from New Brunswick. This specimen is almost certainly mislabeled and we do not believe that A. ralla occurs in the Northwest.

This species is widely distributed throughout much of North America in moist forest and riparian habitats.  In the Pacific Northwest, it is largely restricted to the riparian zones along creeks and rivers, and to quaking aspen forests in the boreal forest, Rocky Mountain, and Basin and Range regions. It occurs at high elevations in quaking aspen forest on Steens Mountain in southeastern Oregon.

Anathix puta is widespread in forest and aspen groves of the Pacific Northwest although records are relatively widely scattered south of British Canada and the Idaho Panhandle. It has been found along the east slope of the Cascades in Oregon and Washington, in the Blue Mountains, on Steens Mountain in southeastern Oregon, and in the Wasatch Mountains of southeastern Idaho.

The range of this species extends east across the boreal forest and parklands of southern Canada to the near the Atlantic Coast. It occurs in the adjacent northern United States as far south as Wisconsin, West Virginia, and northern New England. This moth is found further south in the Rocky Mountains where it reaches northern New Mexico.

This species is a foodplant specialist feeding on willows (Salix spp.) and cottonwoods (Populus spp.) in the Salicaceae. It appears to favor quaking aspen (P. tremuloides).

Anathix puta flies during late summer and early fall, usually in August and September. It is nocturnal and comes to lights.