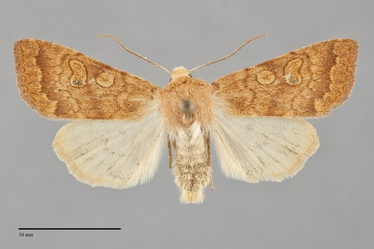 Sunira decipiens is a fall-flying, small to medium-sized moth (FW length 14–17 mm) that flies in forests throughout most of the Northwest. It has a light yellow to orange forewing with darker orange-brown lines and spots, and a pale yellow hindwing. The ground color is pale ochre to bright orange-tan, sometimes powdery. An orange-brown shade precedes the subterminal line and the terminal area is sometimes slightly grayer than the rest of the wing. The lines are comprised of darker and lighter shades of the ground color, usually appearing dark orange. The basal line is excurved near the wing base. The antemedial line is angled toward the outer margin with three laterally convex segments, one at each end and one on the mid-forewing. The median line is diffuse, dark orange, rarely slightly gray. The postmedial line is moderately toothed on the veins, drawn sharply toward the base on the costa and smoothly and broadly excurved around the reniform spot and angled toward the base below CuA1. The subterminal line is pale yellow, slightly irregular, preceded by the aforementioned shade. The terminal line is a series of small orane spots. The fringe is slightly darker orange than the ground color. The orbicular and reniform spots are outlined in the color of the lines. The orbicular spot is round, filled with the ground color. The reniform spot is kidney-shaped, filled with the ground color and a gray to black spot in the lower end in some specimens. The claviform spot is weak or absent, moderate-sized. The hindwing is pale yellow, sometimes with faint gray discal spot, postmedial line, and a trace of the submarginal band near the anal angle. The head and thorax are yellow to orange, matching the ground color of the forewing. The male antenna is biserrate.

This species can be recognized by its yellow or light orange color lacking gray suffusion, pattern of orange-brown lines and spots, and a light yellow hindwing. It is similar to Sunira verberata and Sunira bicolorago. The former species has extensive gray shading on both wings. Sunira bicolorago is more similar but is restricted to southeastern British Columbia in the West. It usually has some gray on both wings, especially in the subterminal area of the forewing and on the submarginal hindwing. Anathix aggressa is a pale yellow moth that flies in steppe and riparian forests with cottonwoods. It has a smooth subterminal line, unlike S. decipiens.

The type locality of Orthosia acta Smith is Washington, Pullman. This name is considered at present to be a synonym of Orthosia decipiens Grote, type locality Northern Indiana. As pointed out by J. G. Franclemont in Forbes (1954) the correct name for this western species is most likely Sunira acta since its range does not approach Indiana.

This species replaces S. bicolorago in most areas west of the Rocky Mountains. It is found in moist forest and riparian habitats.  It is abundant in coastal rainforests, mixed hardwood forests, and along creeks and rivers at low elevations west of the Cascades.  It is less common in mixed hardwood-conifer forests at higher elevations in the Cascades.  East of the Cascades, it is more narrowly restricted to moist middle-elevation hardwood-conifer forests or riparian zones.

Sunira decipiens is widely distributed in forests throughout our region as far north as southern British Columbia. It occurs on both sides of the Cascades Range and has been found most commonly west of the crest. The range extends east to the southeastern corner of British Columbia, the Idaho Panhandle, the Blue Mountains, and Steens Mountain in southeastern Oregon.

This species is found near the Pacific Coast from southern British Columbia to central California. Isolated records from Nevada and southern California are shown on the Moth Photographers Group website.

No information is presently available regarding larval foodplants of this species.  We have no records of hardwoods for this species, so it may be feeding mostly on herbaceous vegetation in the Pacific Northwest.

The flight period of S. decipiens is during the fall, beginning in late August and lasting until early November. It is nocturnal and comes to lights.