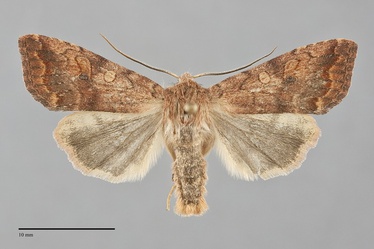 Sunira verberata is a medium-sized moth (FW length 15–17 mm) that flies in forests throughout much of the Northwest during the fall. It has a mottled orange-tan forewing with darker dark gray and red-brown shade in the distal subterminal area, and a gray hindwing. The forewing has a pointed and occasionally slightly falcate apex. The ground color is ochre-tan, orange-tan to dark orange. The subterminal area except the costa is dark gray, and there is a red-brown shade preceding the subterminal line. The terminal area is often gray, but can also be lighter than the rest of the wing. More extensive gray shading is present on the posterior wing in some individuals. The veins are sometimes dark on the distal wing. The lines are red-brown to brown. The basal line is located near the wing base. The antemedial line is preceded by a pale shade of the ground color, is angled toward the outer margin and is drawn toward the base on the cubital vein and 1A+2A. The median line is dark orange, brown, or gray, well-defined or diffuse, sinuous and angled at the lower reniform spot. The postmedial line is moderately toothed on the veins and followed by a line of the pale ground color. It is drawn sharply toward the base on the costa and is sinuous elsewhere, either excurved around the reniform spot or angled toward the base below the costa. The subterminal line is pale yellow or light orange, slightly irregular, preceded by the aforementioned shades. The terminal line is thin and dark or absent. The fringe is slightly darker orange than the ground color, sometimes weakly checkered with gray. The orbicular and reniform spots are outlined in red-brown and are moderately large. The orbicular spot is round, filled with the ground color. The reniform spot is kidney-shaped, filled with the ground color and a graphite-gray spot in the lower end. The claviform spot is weak or absent, moderate-sized. The hindwing is pale yellow but heavily suffused with gray except on the anterior and outer margins. Weak gray discal spot and postmedial line are present. The head and thorax are yellow-tan, tan, or dark orange. The male antenna is biserrate.

This moth can be identified by its pointed forewing shape, warm ochre to orange color with gray and red in the subterminal area, and extensive dark gray on the hindwing. It is most similar to Agrochola purpurea, a common species in our region. It has a black spot on the costa that S. verberata lacks. The other Sunira species in our region lack gray shading entirely or have less extensive gray on both wings. They also lack the red-brown line that precedes the subterminal line in S. verberata.

This species is widely distributed in moist forest habitats throughout much of the Pacific Northwest, but is often rare and sporadic.  It has been found most frequently in the riparian zone along creeks and rivers at low to middle elevations in coastal rainforests, mixed hardwood forests, and mixed hardwood-conifer forests.

Sunira verberata is found in forests throughout much of the Pacific Northwest as far north as west-central British Columbia. It has been found as far east as the southeastern corners of British Columbia and Idaho. It has not yet been recorded from southwestern Oregon, although it is likely that it occurs there based on its distribution in California.

This species is predominantly a Pacific Northwest moth, although it also occurs in central and southern Alberta and in northern California.

The flight period of S. verberata is the fall. It has been collected from late August until early November but has been found most commonly during September. It is nocturnal and comes to lights.