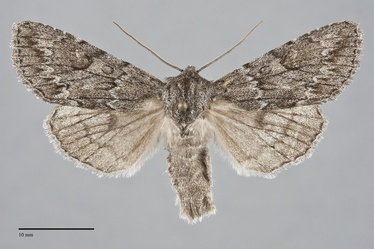 Andropolia contacta is a large gray moth (FW length 20–23 mm) that flies in boreal and montane forests during late summer. It has powdery forewings with prominently toothed lines, and a gray hindwing with a scalloped postmedial line. The forewing outer margin is weakly scalloped. It is powdery medium-dark gray. The lateral and posterior portions of the median area are usually slightly darker gray. The terminal area is darker, black at the subterminal line and fading almost to the ground color at the outer margin. The basal line is a black mark on the costa. The antemedial line is black laterally and light gray medially, evenly zigzagged. The median line is an oblique dark gray line from the costal margin to the median reniform spot, absent on the mid-wing, and barely evident on the posterior margin. The postmedial line is black often bordered laterally by light gray, evenly toothed, drawn sharply toward the base on the costa, widely arched toward the outer margin and then angled toward the base, nearly parallel to the outer margin on the posterior wing. The subterminal line is jaggedly irregular across the entire wing. The terminal line is a series of large black triangles. The fringe is weakly checkered gray. The orbicular, reniform, and claviform spots are partially outlined by black. The orbicular spot is a small oval, often weak laterally, filled with the ground color. The reniform spot is kidney-shaped, strongly outlined inferiorly and open toward the outer margin, filled with the ground and sometimes brown inferiorly. The claviform spot is long and thin, weak apically. The hindwing is light gray with an even suffusion or darker gray scales, with dark gray veins, discal spot, distinctly scalloped postmedial line, and terminal line. The hindwing fringe is white with a two-tone gray base. The head and thorax are gray with a weak black line across the distal collar. The male antenna is strongly biserrate.

This moth can be recognized by its relatively large size, even powdery gray color, and the jaggedly irregular subterminal line followed by a darker terminal area. It is most similar to Andropolia aedon, a species that is common to the south of the range of A. contacta, but overlaps it slightly in southern British Columbia and the high Cascades. It is brighter bluish gray with patches of light olive-brown and a very uniform peppered appearance. Its terminal area is less uniform gray than that of A. contacta resulting in a series of black arrowhead-like marks along its subterminal line. Andropolia contacta could be mistaken for one of several large Polia species with which it flies in the mountains. Their subterminal lines are much smoother than those of Andropolia, and their eyes are covered with fine hairs like other members of their tribe Hadenini.

The type locality of the synonym Polia sansar Strecker is Wash[ington], Seattle.

This species is widely distributed in moist forests across Canada and in the mountains of western North America.  In the Pacific Northwest, it is confined to quaking aspen forests in the Rocky Mountain region and less commonly along the east slope of the Cascades.  It is particularly common at high elevations in the quaking aspen forests of the Basin and Range province, including in the Steens Mountains of southeastern Oregon.

Andropolia contacta is found in boreal and montane forests throughout most of British Columbia. It is also found in the Rocky Mountains and on the higher peaks in the Basin and Range province in southern Idaho and Oregon. It occurs in the Cascades of Oregon and Washington, but is rare in this part of the Northwest.

This boreal forest species is found across North America from Alaska to Hudson Bay, Newfoundland, and the northern United States. The range extends south to Colorado, Utah, and Nevada in the mountains.

In eastern North America, this species is reported to feed on both alders (Alnus spp.) and birches (Betula spp.) in the Betulaceae, and on willows (Salix spp.) and cottonwoods (Populus spp.) in the Salicaceae.  However in the Pacific Northwest, it might be a specialist on quaking aspen (P. tremuloides) based on its habitat preference.

This moth flies during late summer and early fall. Records from the Pacific Northwest range from mid-July to early September. It is nocturnal and comes to lights.