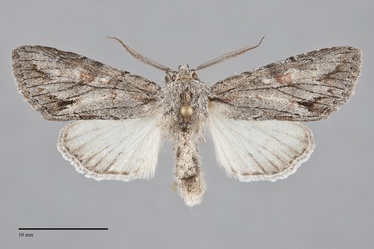 Andropolia diversilineata is a medium-sized moth (FW length 17–20 mm) that flies east of the Cascades during the summer. It has gray forewings with a jagged subterminal line that divides the dark terminal area into two triangles that extend toward the base proximal to the postmedial line, variable coloring of rusty brown in the reniform spot and median area and black suffusion proximal to the postmedial line, and wide male antennae. The forewing outer margin is weakly scalloped. It is even light to medium-dark gray. The terminal area is darker gray, varying from light suffusion in the medial portion of this area to dark gray with black at the subterminal area. This area is demarcated by the jagged subterminal line which reaches the outer margin and divides the area into two triangles, the tips of which extend medial to the median line. The fold and subterminal area are lighter gray in some specimens. Many specimens are darkly shaded with brown-black on the base and median area in a variety of geometric patterns. Rusty brown often fills the reniform spot, and in many also suffuses the median area or the entire wing. The basal line is evident on the costa. The antemedial line is variable, thin and gray to diffuse and black, angled toward the outer margin and slightly irregular with a lateral projection near the posterior margin in specimens in which the line is thin. The median line is dark gray to black, wide and diffuse, strongly angled from the costa through the posterior reniform spot and curved toward the base on the posterior wing. The postmedial line is gray to black, faint to dark but not wide and diffuse, weakly scalloped, drawn sharply toward the base on the costa and weakly angled toward the base on the distal wing without a significant deviation toward the base below the reniform spot. The subterminal line is jaggedly irregular as described above, with sharp teeth toward the base below M2 and in the fold and a strong W-mark to the outer margin on M3 and CuA1. The terminal line is a series of thin gray spots. The fringe is weakly checkered gray. The orbicular and reniform spots are partially outlined by thin light to dark gray lines. The orbicular spot is absent or a small oval filled with the ground color. The reniform spot is kidney-shaped, dark inferiorly and poorly defined elsewhere, filled with the ground color and often with rust-brown. The claviform spot is small and thin, often absent, filled with the ground color or pale gray. The hindwing is white with light gray veins and discal spot, and a dark terminal line. The hindwing fringe is white with a gray median line. The head and thorax are gray with a weak black transverse across the median collar in some specimens and a rusty central spot in specimens with rust on the forewing. The male antenna is strongly bipectinate.

This species can be identified by its light gray color, the jagged dark triangles on the distal wing, the absence of dashes, and, when present, rust or black suffusion. Males are more easily identified because of their wide antennae. Other similar-sized gray members of the tribe Xylenini have dashes at the base in the median-area fold. Polia nugatis, a member of the tribe Hadenini, flies with A. diversilineata in the fall and is similar in size. It has a streakier forewing with a subterminal area that is darker than the terminal area, the opposite of A. diversilineata, and usually has a spike-like extension toward the base from the lower reniform spot. Its eyes are covered with fine hairs, like other species in its tribe.

Larva is smooth, gray-brown with mottled black dorsal and lateral markings.  It is illustrated by Miller & Hammond (2003).

Andropolia diversilineata is widespread east of the Cascade summit as far north as southern British Columbia and as far east as the Idaho Panhandle. It appear to be absent from the Basin and Range province in southeastern Oregon and southern Idaho.

This species is found predominantly in the southwestern part of the United States from California to Colorado south of our region. It occurs in southern California, but not in southern Arizona.

This species feeds commonly on bitterbrush (Purshia tridentata) in the Rosaceae in central Oregon. It likely prefers this plant where it is available, but must feed on other plant species since bitterbrush is absent from parts of its range. The larva may feed on other woody members of the rose family such as serviceberry (Amelanchier spp.) west of the Cascades.

The flight season of this moth spans the summer months from early June until mid-September. It is nocturnal and comes to lights.