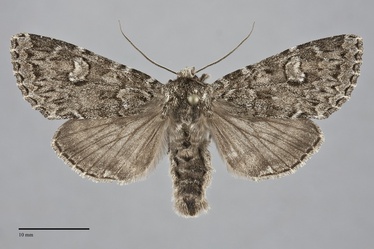 Polia propodea is a large (FW length 22 - 25 mm), dark gray, rarely collected moth that occurs in subalpine forests in the northern portion of our region. The forewing is slightly pointed, has a scalloped outer margin, and has a large, pale-rimmed reniform spot. The color is powdery and slightly mottled olive gray, slightly darker in the median and at the costa in the subterminal area. The antemedial, and postmedial lines are dark gray to black, double, with slightly lighter gray filling. The basal and antemedial lines are irregular, zig-zag on the veins. The postmedial line is toothed on the veins, sharply drawn toward the base at the costa and nearly parallel to the outer margin elsewhere. The median line is gray, diffuse, faint to distinct across the width of the wing. The subterminal line is pale and finely irregular, preceded by a dark gray to black shade or series of ill-defined spots that are strongest opposite the cell and in the fold near the anal margin. The terminal line is curved between the veins and accentuates the scalloped contour of the margin. The fringe is gray. The orbicular spot is thin, black, round or slightly oval, filled with slightly lighter gray than the ground and a faint central ocellus in some individuals. The reniform spot is black with a pale inner component that is broken into several white spots in the lateral part of the spot and darker elsewhere, and central filling that is similar to the filling of the orbicular spot. It is large and heart-shaped with a deep indentation on the lateral side. The claviform spot is black, variable, absent, small, or moderately large. The hindwing is medium-dark gray with slightly darker basal suffusion and dark gray veins, discal spot, postmedial line, and submarginal band. The fringe is pale gray bordered by a dark gray terminal line. The head and thorax are hoary olive-gray with an ill-defined black transverse line near the tip of the collar and near the margins of the tegulae. Weak tufts are present on the thorax and abdominal segments. The eye is covered with fine hairs. The male antenna is biserrate.

This species is most likely to be confused with Polia rogenhoferi which occurs in the same subalpine habitats across southern British Columbia. The reniform spot of P. propodea is more deeply indented and filled with lighter scales than that of this species, and it is also lighter colored with more a distinct postmedial line. Polia imbrifera, found in eastern British Columbia, is also similar to P. propodea but it has a dark triangular mark near the anal angle of the forewing that P. propodea lacks. The presence of hairs on the eye of P. propodea can be used to tell it from the similar-sized and colored Eurois astricta in the tribe Noctuini and Andropolia contacta in the tribe Xylenini with which it can occur. The former species has a dark gray hindwing with a pure white fringe and the latter has a deeply serrate subterminal line preceded by a solid dark shade, both features lacking in P. propodea.

This species is widely distributed in spruce-fir forests across Canada, and throughout the Rocky Mountains at high elevations.  It is usually uncommon or rare.

Polia propodea has been collected in the mountains of British Columbia and extreme northern Washington. In Washington it is found in the extreme north-eastern Cascades west of the Okanogan River valley and in the Selkirk Mountains. It likely also occurs in northern Idaho and western Montana.

This species is widely distributed in North America but is only known from a handful of localities. Outside of the Pacific Northwest it is known from the Rocky Mountains in Alberta and Colorado as well as from Yukon Territory. In the East it has been found on the Gaspe Peninsula of  Quebec and the island of Newfoundland.

Adults fly during the summer and have been collected in July and August in our region. They are nocturnal and come to lights.