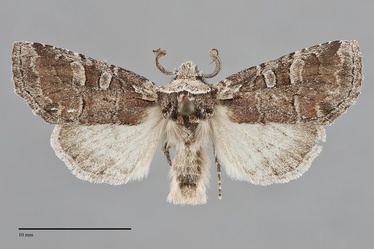 Brachylomia elda is a small moth (FW length 14 mm) that flies east of the Cascades during the fall. It has a gray forewing with red-brown suffusion, a pale yellow anterior wing base, a short basal dash, and a wide bipectinate male antenna. The gray forewing color ranges from light to medium-dark gray, lightest from specimens in southerly arid environments and darker from the northern part of the range. The costa in the subterminal area and the terminal area are darker gray. A short black basal dash is present, and the base of the wing anterior to to it is light yellow-gray. The rest of the wing is variably suffused with red-brown, strong to very faint in the cell and vicinity. The basal, antemedial, and postmedial lines are faint and incomplete, except on the costa and where the postmedial line crosses the fold, where they each form double lines filled with light gray. The antemedial line is transversly oriented and slightly irregular. The median line is gray to black, usually faint but nearly as strong as that of Brachlomia rectifascia on occasion. The postmedial line is stronger than the other lines and has paler gray filling. It is weakly toothed on the veins, drawn sharply toward the base on the costa, angled toward the base lateral to the reniform spot, and concave toward the base and nearly perpendicular to the posterior margin below the spot. The subterminal line is light gray, slightly irregular, preceded by dark gray on the costa but lacking a shade elsewhere. The terminal line is thin, black. The fringe is gray, similar to the ground color. The orbicular post is an upright oval, outlined in black on the medial and lateral sides, filled with pale gray to cream peripherally and the ground color centrally. The reniform spot is moderate-sized, kidney-shaped, outlined in black medially and blending with the adjacent wing interolaterally, filled with light gray or cream medially and the ground color elsewhere. The claviform spot is absent or at most a few black scales at the tip. The hindwing is light to medium gray, lightest in southerly populations, with slightly darker and ill-defined discal spot, postmedial line, and marginal bands. The hindwing fringe is whitish with a gray base in dark specimens. The head and most of the collar are cream to light yellow-gray and the edge of the collar is dark gray. The remainder of the thorax are powdery gray with a few red-brown scales, including in specimens with little red color on the wing. The male antenna is strongly bipectinate.

This moth can usually be identified by the combination of small size, gray forewing with red-brown suffusion, black basal dash, and contrasting pale yellow base and similar head and collar. Males are easiest to identify due to their wide antennae. Brachylomia populi could potentially be confused with it because some specimens are reddish brown or dark orange and gray, and it has a similar wide antenna. It is usually slightly larger, has a more mottled wing with bold dark markings, and lacks dark outlines of its forewing spots unlike those of B. elda, which are rimmed in black. Other Brachylomia species in the Northwest range of B. elda are darker gray, lack any reddish tint outside of the reniform spot (present in some specimens of Brachylomia rectifascia), and have narrower male antennae.

This species is widely distributed and can be locally common in riparian habitats along creeks and rivers of arid regions at low to mid-elevations. It is associated with riparian willow thickets in northern Nevada.

Brachylomia elda has been found in western Montana, the east slope of the Cascade Range in Oregon and Washington, and in eastern Oregon.

The distribution of this species is predominantly west of the Rocky Mountains with the exception of a record from near the border of Colorado and Wyoming. It has also been found in northern Utah, Nevada, and California outside of the Northwest region.

No information is presently available regarding larval foodplants of this species, but it probably feeds on willows (Salix spp.) and cottonwoods (Populus spp.) in the Salicaceae based upon closely related species.

The flight of this moth is during late summer and fall. It is most commonly collected during August and September. It is nocturnal and comes to lights.