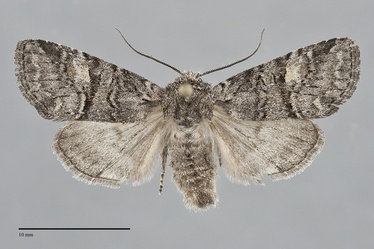 Brachylomia rectifascia is a small to medium-sized moth (FW length 13–16 mm) that flies in forests throughout the Northwest during the summer. It has a gray forewing with a straight black median line and a large reniform spot filled with ochre or pink. The apical forewing is long for this genus. The color is medium-dark gray, becoming gradually lighter toward southern Oregon. The anterior antemedial and subterminal areas are darker gray in a few specimens. The base anterior to a short bifurcated black basal dash is lighter gray, as is the apex. The basal, antemedial, and postmedial lines are dark gray to black, double filled with the ground color or slightly lighter gray, the components abutting the median area darkest. The antemedial line is slightly irregular, nearly straight across the wing at a right angle to the posterior margin. The median line is thick and black and diffuse, straight or slightly concave toward the base, the posterior third abutting the postmedial line. The postemedial line is weakly toothed on the veins with dark veins segments in the subterminal area at the tips of the teeth, sharply drawn toward the base on the costa and smoothly curved elsewhere, the segment lateral to the reniform spot is angled toward the base and the segment below the reniform spot is nearly perpendicular to the posterior margin and abuts the median line. The subterminal line is light gray, wide and irregular. It is preceded by a dark gray shade that is strongest at the costa. The terminal line is dark gray, thin. The fringe is gray. The orbicular spot is round or an upright oval, outlined in thin black outer and thin inner light gray lines and filled with the ground color. The reniform spot is large, kidney-shaped with the posterolateral corner crossing the inner component of the postmedial line, outlined in thin black and filled with light yellow or rose pink. No claviform spot is evident. The hindwing is light to medium-dark gray with faintly darker discal spot, postmedial line, and submarginal band. The veins and terminal line are darker gray. The fringe is two-toned gray. The head and thorax are gray with pale luteous collar base that is separated from the gray edge by a black transverse line. The male antenna is asymmetric, pectinate anteriorly, and serrate posteriorly.

Brachylomia rectifascia can be recognized by its gray color, straight black median line, smooth S-shaped postmedial line, and light yellow to pink reniform spot. This combination is diagnostic for this moth. Litholomia napaea is similar in size and has a straight black median line. It flies in the late fall and early spring and is unlikely to be confused with B. rectifascia if the collecting date is known.

Brachylomia cascadia Troubridge and Lafontaine (2007) was described from Fraser Canyon south of Lillooet, British Columbia, Canada as a species distinct from B. rectifascia, previously described from the Sierra Nevada. The authors considered the Northwest populations to be different from the California ones on the basis of a 2.1% difference in the mitochondrial CO1 gene, darker color on both wings in the northern populations, and slight differences in widths of the male antennae. Based on the distribution map shown in the description they did not examine material from southern Oregon. The hindwing of Brachylomia rectifascia becomes increasingly light in southern Oregon suggesting that the difference in darkness between the Northwest and California populations might be clinal. The difference in CO1-DNA is identical to intraspecies variation in Brachylomia algens, which shows that this degree of gene variation can be normal in Brachylomia species. Because of this, we have elected to maintain the use of B. rectifascia for the Northwest, leaving the name cascadia available for use as a subspecies. This situation should be studied further in southern Oregon and northern California.

Brachylomia rectifascia is found in forests throughout the Northwest as far north as south-central British Columbia. It occurs on both sides of the Cascades, reaching Vancouver Island.

This species is found along the Pacific Coast of North America. It occurs in coastal northern California and throughout the Sierra Nevada.

No information is presently available regarding larval foodplants of this species, but it is probably feeds on willows (Salix spp.) and cottonwoods (Populus spp.) in the Salicaceae like related species. Willows are most likely based on habitat associations.

The flight period of B. rectifascia is summer and early fall. It has been collected from late June until mid-September but is most common in late July and early August. It is nocturnal and comes to lights.