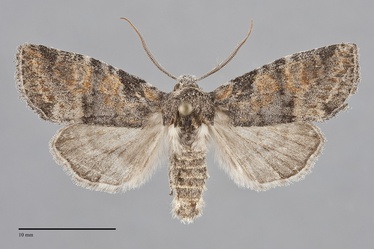 Brachylomia populi is a very variable, small to medium-sized moth (FW length 14–16 mm) that flies near aspens and cottonwoods during the fall. It has powdery mottled cream, orange-brown, and black forewings with pale-rimmed orbicular and reniform spots. The forewing has a convex outer margin but appears to be rectangular. The color and dark pattern are highly variable. The ground color is usually cream or pale yellow-gray but can be darker sooty gray. Burnt-orange suffusion is common, usually darkest on the median area. Charcoal gray to black scales are sprinkled across the entire wing to produce a dusty salt-and-pepper appearance. More solid gray to black patches are consistent on the anterior antemedial area, on the costa in the median and subterminal areas, and in the basal terminal area, but the entire wing proximal to the median line can be black. No basal dash is present. The basal, antemedial, and postmedial lines are diffuse gray, widely double-filled with cream or light gray. The antemedial line is straight, perpendicular to the trailing margin. The median line is powdery black, straight. The postmedial line is incomplete, usually with loss of the dark outer component on the posterior wing, is toothed on the veins, drawn sharply toward the base on the costa, is irregular lateral to the reniform spot, and perpendicular to the posterior margin below the spot. The subterminal line is cream or light gray, diffuse and often fused with the light-colored subterminal area, slightly irregular, preceded by dark gray on the costa and lacking a preceding shade elsewhere. The orbicular and reniform spots lack dark outlines and are ill-defined, usually pale-rimmed with cream, light gray, or orange. The orbicular spot is round, often with darker gray central filling. The reniform spot is moderately-large, kidney-shaped, less often filled centrally with dark gray than the orbicular spot. The claviform spot is absent. The hindwing is whitish gray, with diffuse gray discal spot, postmedial line, and marginal bands. The hindwing fringe is whitish gray and gray. The head and posterior thorax is a powdery mixture of light and dark gray and burnt-orange. The collar has a light base, usually cream or light gray and orange. The male antenna is strongly bipectinate.

This moth is usually easily recognized despite its variable appearance by its powdery mixture of cream, orange, and black scales and pale cream to orange spots lacking well-defined borders. Some specimens could be mistaken for Brachylomia elda, found in eastern Washington and Oregon, a smoother red-brown moth that has wide antennae in males. It has a basal dash and black outlines of the forewing spots, unlike B. populi. Cream and black specimens of B. populi resemble Raphia frater, which fly with it in desert cottonwoods. It has a wide black area along the posterior margin and a round dark-outlined orbicular spot with a central ocellus, features lacking in B. populi.

This species is widely distributed in low-elevation riparian cottonwood forests and in quaking aspen forests at higher elevations in the Rocky Mountain region.

Brachylomia populi is widespread in the Pacific Northwest. It is most extensively distributed east of the Cascades where it is found as far north as southern British Columbia. It has been found in the Panhandle and southeast corner of Idaho and in the Cascade Foothills of Washington south to central Oregon. It appears to be limited to northwestern Washington, southwestern British Columbia, and the Willamette Valley of western Oregon west of the Cascades.

This moth is common and widespread in the American West. It is found from central Alberta and western Saskatchewan to northern New Mexico, eastern Arizona, and eastern California outside of our region.

This species is a foodplant specialist feeding on cottonwoods (Populus spp.) and quaking aspen (P. tremuloides) in the Salicaceae.

The flight season of B. populi is the fall, most commonly from late August through September. It is nocturnal and comes to lights.