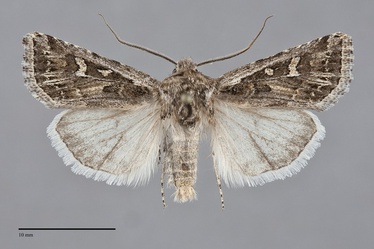 Euxoa cinereopallidus is a fall-flying, small Euxoa (FW length 12–15 mm) that flies in sage steppe during the fall. It has a streaky, tan-gray forewing with white veins bordering the cell, pale-filled spots, and a pale hindwing with diffuse gray marginal suffusion. The females are slightly smaller than the males. The ground color is dull tan-gray, darkest gray in the cell and terminal area. The fold is gray-ochre, and the distal subterminal area is lighter gray, especially below the apex and along veins M3 and CuA1, where teeth extend to the outer margin. The cubital vein and veins bordering the anterior cell are silver gray to the reniform spot. The other veins are black. A weak basal dash is present in some specimens. The white and black basal line is evident at the costa and cubital vein in some specimens. A segment of the antemedial line is present at the base of the claviform spot. The postmedial line is gray and whitish gray on the costa, weakly scalloped and evident as the oblique transition between the darker median and lighter subterminal areas below the reniform spot. The subterminal line is pale gray, slightly irregular, traversed by the light "W" mark described above, and is preceded by a dark gray mark on the costa and several small black wedges between veins on the mid-forewing. The terminal line is black, thin or a series of spots. The fringe is varies from tan off-white to dark gray-brown with a tan base. The orbicular and reniform spots are partially outlined in black, are lined with light gray, and are variably filled with white, tan, or gray. The orbicular spot is small to moderate-sized, round to ovoid, complete or open toward the costa. The reniform spot is deeply indented laterally, boomerang-shape, sometimes traversed by the pale cubital vein. The claviform spot is small to moderate-sized, narrow, sometimes absent. The hindwing is whitish gray with light gray suffusion near the margin and slightly darker discal spot, veins, and terminal line in males; duskier light gray-brown with greater wider gray marginal band in females. The hindwing fringe is white in both sexes. The head and thorax are powdery olive-gray, often with a hoary light gray edge on the collar. A frontal tubercle is present. The male antenna is biserrate. Euxoa cinereopallidus is placed in the large subgenus Euxoa.

This species can usually be recognized by its fall flight, pointed forewing, tan-gray color, pale veins and filling of the spots, and light hindwing without discreet marginal banding. It is similar to several other fall-flying steppe species with which occurs, particularly Euxoa cicatricosa and Euxoa dargo. The former species has more yellow color on the forewing, especially in the fold, and the light markings in the spots and on the distal wing are more crisp and sharply-defined. Euxoa dargo is smaller than E. cinereopallidus, especially males, The hindwing of E. dargo is two-toned, with a light gray marginal band. A few fall-flying Sympistis species occur with these Euxoa species during the fall. All of them have light and dark markings on the ventral hindwings that the Euxoa species lack.

This species is widely distributed on dry short-grass prairies and rangelands at low elevations.  In the Pacific Northwest, it is usually uncommon to moderately common on low-elevation dry sagebrush steppe.  However, it became more common in central Oregon sagebrush steppe after a wildfire.

Euxoa cinereopallidus is found in the dry interior steppe regions of the Pacific Northwest as far north as south-central British Columbia. It is more widespread in Oregon than in Washington. It is restricted to the driest parts of the Columbia Basin near the Columbia River.

The range of this species extends east from the Pacific Northwest across southern Canada to Saskatchewan. It is found in most of the West as far south as northern Texas, southern New Mexico, central Arizona, southern Nevada, and eastern California (Lafontaine 1987). Relatively few records are shown for it on the Moth Photographers Group website.

Adults fly in the fall, with Pacific Northwest collection records from September. It is nocturnal and comes to lights. Adults can be found taking nectar on the flowers of rabbitbrush (Ericameria nauseosus, Asteraceae).